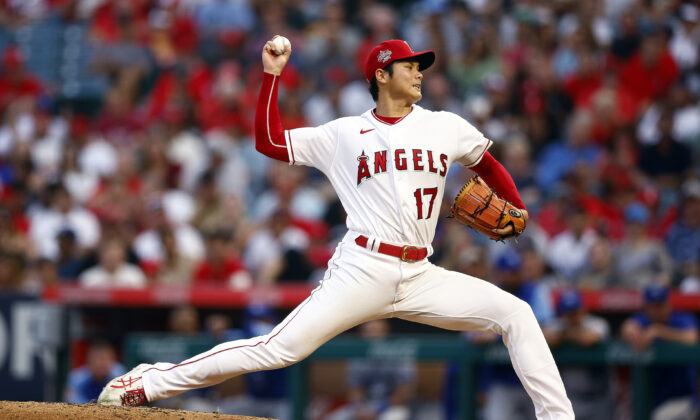 Shohei Ohtani #17 of the Los Angeles Angels throws against the Kansas City Royals in the second inning at Angel Stadium of Anaheim, in Anaheim, on June 22, 2022. (Ronald Martinez/Getty Images)
Baseball

The American League MVP from last season, Shohei Ohtani, continues to carry the Los Angeles Angels (34–38) both offensively and on the mound—as demonstrated earlier in the week at Angel Stadium, where he became the first player in MLB history to have at least eight RBIs in a game and strike out at least 10 batters the following day.

On Tuesday, the Angels celebrated the 20th anniversary of their 2002 World Series title with a homecoming ceremony of former players prior to their matchup against the Royals.

Ohtani showed his batting prowess by twice hitting three-run homers—the most by a Japanese-born player in MLB, resulting in a career-high eight RBI’s—in an unsuccessful comeback bid to eventually fall in 11 innings 12–11.

The following night, Ohtani (6–4, 2.90 ERA) pitched eight shutout innings in a 5-0 win over the Royals, striking out 13 batters for another career-high, while giving up just two hits and retiring 23 of the last 24 batters he faced.

His previous high of 12 strikeouts out of 12 batters occurred earlier this season versus the Astros and against the A’s back on April 8, 2018.

“He just put us on his back,” said Angels interim manager Phil Nevin. “It was just impressive. I thought about taking him out after the seventh but he was adamant, ‘This is mine.’ What a day, what a performance by him.”

Ohtani made baseball history with both an eight-RBI game and a 13-strikeout game separately on consecutive nights.

Former Atlanta Braves right-hander, Tony Cloninger, came the closest with both a 12-strikeout game during the 1966 season on Opening Day and a nine-RBI game on two grand slams as a pitcher on July 3—one strikeout short of Ohtani.

Ohtani became the Angels’ 19th player in history with 13 strikeouts—the first since Patrick Sandoval last year on July 24 against the Twins.

“There’s still the ‘wow’ factor,” said Kansas City’s Whit Merrifield. “Nobody else is doing what he’s doing. Definitely just a unique, once-in-a-generation-type player, and it’s fun to share the field with him.”

“Watching it every day, you think you get used to the greatness, but there’s a lot of things involved with him,” continued Nevin. “Just the way his mind is in the game, he’s aware of everything. He’s incredible. To see what he does on a baseball field, it’s fun to be a part of every day.”

Ohtani won his third consecutive and jumped into fifth in the AL in strikeouts, stated through his interpreter, “We were on a losing streak, and I just wanted to put an end to that, to get the team rolling. It’s what the team needed.”

His pitching stats are ahead of last year, with strikeouts up and both his walks and ERA down.

Meanwhile, Ohtani’s hitting is slightly behind last year, batting .301 in 22 games since May 29 with six homers and 16 RBIs.

“I don’t think you’re going to find as many guys with as many weapons as what we saw [Wednesday],” said Royals manager Mike Matheny. “He was throwing it all for strikes, and he mixed it up. He was throwing three different sliders, plus a cutter and a curve.”

“When the split started going, that’s when the strikeouts really started to happen, and he’s got 100 [mph] in the tank that he hardly ever showed. You control the strike zone, you have that many things to use, and you’re throwing all of them for strikes, it’s going to be a tough day at the plate,” added Matheny.

The Angels fans gave Ohtani a standing ovation after seven shutout innings, but Ohtani insisted on returning for the eighth.

“I felt like I still had some stuff in the tank,” added Ohtani.

The Angels started 24–13 and was in first place in the AL West as of May 16, but injuries primarily contributed to a franchise-record 14 loses and the firing of manager Joe Maddon.

Ohtani would be the one to end the slide with a 5–2 victory over Boston on June 9th, pitching seven innings of four-hit ball and hitting a two-run homer.

The Angels have now won four of their last six under Nevin, while former MVP, Mike Trout, remains on the injury list with a strained groin.