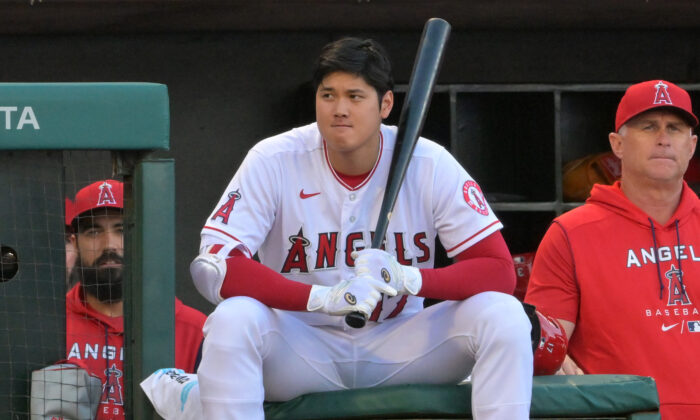 Shohei Ohtani #17 of the Los Angeles Angels waits on deck in the third inning against the Houston Astros at Angel Stadium of Anaheim, in Anaheim, on July 12, 2022. (Jayne Kamin-Oncea/Getty Images)
Baseball

Shohei Ohtani will again shoulder the Los Angeles Angels’ (38–50) hopes to end another losing streak after the team lost five straight games, including a failed rally against the AL West division Houston Astros (57–29), 6–5, at Angel Stadium on Tuesday.

Ohtani (8–4, 2.44 ERA) is scheduled to pitch Wednesday night in the second meeting of a three-game series against the Astros, in hopes of extending a five-game consecutive start win streak and a 28 2/3 scoreless innings streak.

Ohtani won his last starting game against Miami last Wednesday—giving up just one unearned run and two hits in seven innings, striking out 10 and walking three in a 5–2 victory.

The Angels were then swept in a four-game series with the Baltimore Orioles (44–44) before losing their opener versus the Astros. They are now 20 games behind Houston in the AL West after having led the division in mid-May.

The Astros gave up a 5–1 lead going in the seventh inning as starter Luis Garcia gave up just one hit, while striking out seven and retiring his final 13 batters in more than six innings of work—but failed to win his fifth consecutive start.

“They say there’s no such thing as an ugly win, but that wasn’t very pretty,” said Astros manager Dusty Baker. “That was tough.”

In the seventh, Angels Luis Rengifo walked following a ground out by Jared Walsh. Rengifo then advanced to second on a throwing error by reliever Phil Maton on Max Stassi’s fielder choice.

Another throwing error, this one by third baseman Alex Bregman on a fielder’s choice off of Jonathan Villar, loaded the bases.

Maton then hit Brandon Marsh to score Rengifo, 5–2, while the bases remained loaded.

Rafael Montero replaced Maton to strike out Michael Stefanic for the second out. David MacKinnon then hit a line drive single to left field scoring Stassi and Villar to make 5–4.

Montero threw a pitch by catcher Martin Maldonado, resulting in a Marsh run to tie the game 5–5.

“I’m just grateful we were able to bounce back and get that run we needed against a very good closer,” said reliever Maton, who got charged with four unearned runs in the seventh after committing one of the two errors. “We shouldn’t even have been in that situation.”

The Astros would rally in the ninth with Jose Altuve scoring after being walked by Angels reliever Raisel Iglesias, followed by Kyle Tucker’s double to right field, scoring Altuve for a 6–5 final.

“I don’t know if I’ve ever seen a game where they get two hits and five runs without a homer,” added Baker who came into the league in 1968. “But we came back. We were lucky to win the game.”

Mike Trout was replaced in the fifth inning due to upper back spasms, striking out in his first two at-bats against Garcia before leaving the game. He also struck out 16 times while batting .177 on the Angels’ road trip.

“It spasmed up on him,” said Angels manager Phil Nevin regarding Trout. “I didn’t like the way he was moving around in center field after that second at-bat. … These things can be tricky. It’s upper-back, so that’s the comforting thing. But everything checked out OK.”

Ohtani had two walks, ending up 0-for-2 on the night before being replaced to prepare for his last pitching start Wednesday before next week’s All-Star game.

The Astros will start RHP Cristian Javier (6–4, 3.01 ERA), who struck out 14 Angels batters in an 8–1 victory July 1—giving up only Ohtani’s first-inning home run.