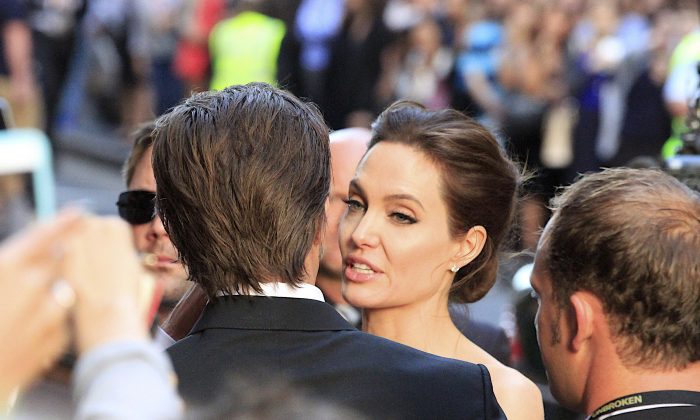 A source is slamming a recent tabloid report that claims Jennifer Aniston and Angelina Jolie are planning a fight at the upcoming Golden Globes in January.

An insider told In Touch magazine that Aniston “has been waiting a decade to look Angie straight in the eye and tell her how she really feels.”

“She’s told friends she’s repulsed by her. Angie stole her man. How is a woman supposed to ever get over that?” a source added. Aniston and Pitt divorced in 2005, around the time that Pitt and Jolie became involved.

“She’s looking forward to proving to Brad and Angie, and everyone else, that she isn’t in any way intimidated by them anymore. She’s been waiting for this showdown for a decade,” the source added.

The story also claims that Jolie “refuses to back down.”

And it claims that Pitt is trying to stop the confrontation but has been unsuccessful so far.

In addition, it says that Aniston is pregnant and that this fact will “win her plenty of sympathy” in the brawl.

However, a source close to the situation told Gossip Cop that the story isn’t true.

“This is dumb, even for In Touch,” the source said. “Which is saying something.”

The National Enquirer tabloid ran a similar report recently, claiming that the organizers are aware that both Jolie and Aniston are looking for a fight and that they’re working hard to avoid anything from happening.

“It’s going to be the most talked-about event of the awards season, and everyone is hoping for a major catfight!” a source told the tabloid.

“But each of them have told Oscar organizers that under no circumstances is there to be any risk of a run-in. Everyone is tearing their hair out trying to make sure it doesn’t happen.”

The source also said that people really want to snap a picture of Jolie and Aniston together, regardless of the circumstances.