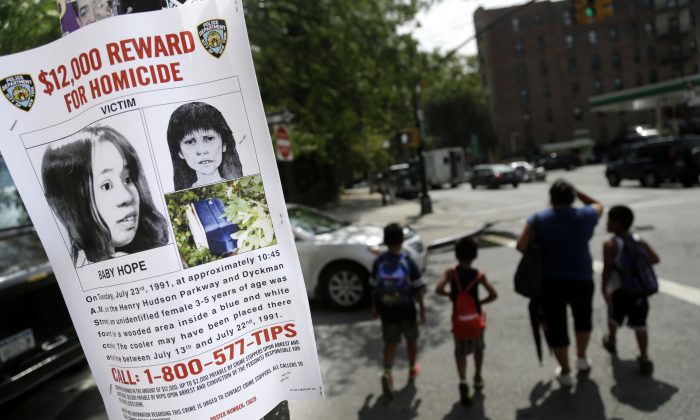 This Tuesday, July 23, 2013, photo shows a poster soliciting information regarding an unidentified body near the site where the body was found in New York. In a dramatic break in a cold case more than two decades old, investigators used DNA to identify the mother of a dead child known only as Baby Hope, police said Tuesday, Oct. 8, 2013. Police Commissioner Raymond Kelly declined to discuss the case further as investigators try to determine the circumstances of the 3- to 5-year-old girl's death. The case dates to July 23, 1991, when a road worker smelled something rotting and discovered the girl's remains inside a picnic cooler along the Henry Hudson Parkway. Her body was unclothed and malnourished and showed signs of possible sex abuse. Detectives theorized at the time that she had been suffocated before being dumped like garbage on a grassy incline. They estimated she was dead six to eight days before the cooler was found. (AP Photo/Seth Wenig)
New York

Angelica Ramirez was identified as “Baby Hope,” the child victim of a 22-year-old Manhattan cold case, it was revealed on Thursday.

A law enforcement source told the New York Post said that Ramirez was the baby who was murdered in 1991. The discovery was made after officials tracked down her mother.

“She was really an angel,” a law enforcement source said.

Officials have made strides to try and solve the case as the 22nd anniversary of her death.

“This has been an investigation that has been conducted for the last 22 years, and the detectives in the 34th Precinct Detective Squad and Cold Case Squad did great work. And I’m proud of them,” Police Commissioner Ray Kelly told the paper.

Neither parent of Ramirez was publicly identified.

“A DNA match was made with the mother and the mother has been cooperating,” Kelly told CBS.

The mother of the child said that she was afraid to contact police because her husband, who is now believed to be in Mexico, was abusive.

Ramirez’s body was discovered in a cooler in Washington Heights. Her body showed signs of sexual abuse and she was malnourished.

This July, police made a renewed effort to get solid information to identify the child, who was between the ages of 3 and 5.