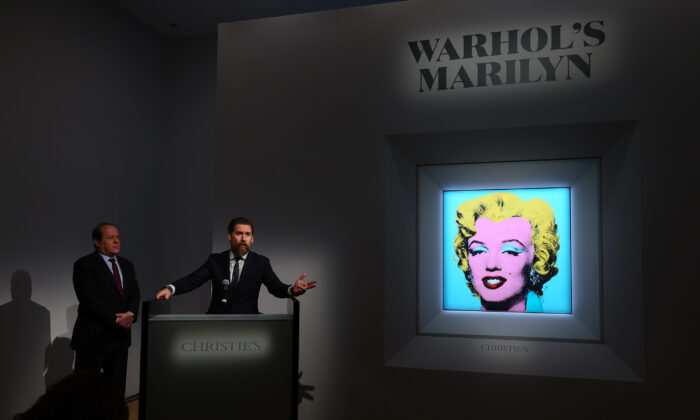 The iconic artwork, which is signed and dated by Warhol, sold at Christie’s in New York for approximately $195,040,000, making it the most expensive piece of 20th century American artwork ever to be sold at auction and the second most expensive artwork to sell at auction of all time.

Known as “Shot Sage Blue Marilyn” the acrylic and silkscreen ink on linen 40-square-inch piece shows a glamorous-looking Monroe up-close in vibrant pops of yellow, pink, blue, and red colors. The actress’s face is set against an aqua blue background.

The piece was one of a handful of images that Warhol made of Monroe in the 1960s and was based on a publicity photo of Monroe from the film “Niagara.” It has been featured on the poster of the Tate Gallery 1971 Warhol retrospective in London.

Warhol began depicting Monroe in his work shortly after her death on Aug. 5, 1962.

Monday’s auction, which was watched virtually, saw registered bidders from across 29 countries competing for the piece, according to Christie’s.

“Combined with other record-setting works, the iconic portrait drove the sale total to $317,806,490, selling 98 percent by value and 94 percent by lot,” the auction house said.

“Shot Sage Blue Marilyn” is the second most expensive artwork to sell at auction of all time, behind Leonardo da Vinci’s “Salvator Mundi,” which sold at Christie’s in 2017 for approximately $450,312,500. The previous auction record for an American painting was held by a Jean-Michel Basquiat skull that sold for $110.5 million.

The auction house had initially said it was expecting bids “in the region of” $200 million, CNN reported.

Christie’s said an unnamed buyer made the purchase Monday night and the proceeds of the sale will go to the Thomas and Doris Ammann Foundation Zurich, which put the painting up for auction. All of the proceeds will be donated to charities, of which 20 percent will go to charities nominated by the buyer, subject to the Foundation’s final approval.

Prior to the sale, Andrew Fabricant, the chief operating officer of Gagosian galleries, told CNBC that it shows that the art market is still going strong and is being viewed as a form of long-term investment amid a volatile economy.

“This shows that quality and scarcity are always going to push the market forward,” Fabricant said. “It will give a bump psychologically to everyone’s thinking.”