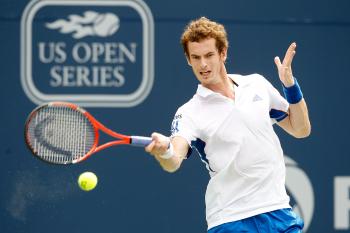 DEFENDS TITLE: Andy Murray got his first win in a final against Roger Federer on Sunday in Toronto at the Rogers Cup. (Matthew Stockman/Getty Images)
Sports

Rahul Vaidyanath
Journalist
Rahul Vaidyanath is a journalist with The Epoch Times in Ottawa. His areas of expertise include the economy, financial markets, China, and national defence and security. He has worked for the Bank of Canada, Canada Mortgage and Housing Corp., and investment banks in Toronto, New York, and Los Angeles.
View profile
Follow
biggersmaller
Print
Britain’s Andy Murray won the 2010 Rogers Cup over Roger Federer 7–5, 7–5 on Sunday in Toronto in a match marred by rain delays.

With the win, Murray (world No. 4) successfully defended his title, something that had not been done in Canada in 15 years.

Murray also pulled off the rare feat of beating Roger Federer and Rafael Nadal on the way to winning the title. Murray took out top-ranked Rafael Nadal in the semifinal on Saturday in convincing fashion 6–3, 6–4.

Murray started the match by breaking Federer two straight times. But Federer clawed his way back to even the first set 5–5.

In a first set with five breaks of service, Murray broke Federer in the 11th game for a 6–5 lead and then closed out the set.

In reaching the final, Federer played just over five hours of tennis in the prior two days to beat Tomas Berdych in the quarterfinals and world No. 2 Novak Djokovic in the semifinals. Federer will be officially No. 2 in the world when the new rankings come out on Monday.

“It was very tough for both of us,” said Murray after the match in an interview with CBC.

After the second rain delay, down a break, Federer came out firing. He broke Murray to even the set at 3–3. But once again in the 11th game, Murray came through with the clinching break of serve.

Murray’s powerful and consistent backhand made it difficult for Federer to win points at the net. Federer had decided to step up his attacks but Murray came up with the answers.

He then hit another blast at 222 kmh (138 mph) but missed a cross-court drop shot. In the end, Murray pulled through for the victory.

“I’ve been working really hard the past few years to give myself a chance,” said Murray.

Coming into the match, Murray held a winning 6–5 record against Federer, but Federer held a 3¬–0 lead in finals. It’s a big psychological boost for Murray to beat Federer in a final.

Federer has not won a title since this year’s Australian Open. At the age of 29, much has been made about how few grand slam titles are won by players older than 29.

He can take comfort from his performance this week and should be in good shape to make another run at the U.S. Open.