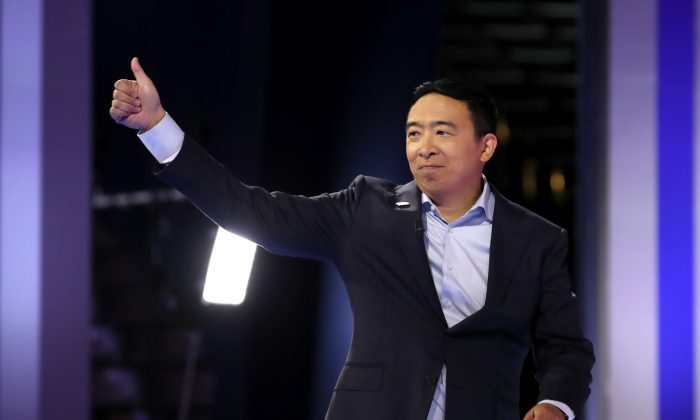 Yang Merges ‘Forward Party’ With Other Disaffected Democrats and Republicans

Several former Republican and Democratic officials have joined forces to form a new political party in an effort to provide Americans with an alternative to the two major parties.

Yang said the new party will “expand very quickly” and is already on the ballot in several states.

“Not Left. Not Right. Forward,” the party states on its official website.

The party aims to be on the ballot in 15 states by the end of 2022 and hopes to be in all 50 states within two years.

“After hundreds of hours of meetings and conversations, we realized that we could do more together than we could apart,” Yang said on his website of the merger.

According to an official announcement (pdf) on the party’s website, the Forward Party will be “a political home for the majority of Americans who want to move past the era of divisiveness and do-nothing politicians—so that our government starts working again.”

The party says it will “look and feel different” and that it “celebrates diverse viewpoints and creativity, works to truly improve communities, and focuses on uniting people around common-sense solutions to foster free people, thriving communities, and vibrant democracy.”

The Forward Party will officially launch at a national convention in the summer of 2023 but is inviting Americans to join the party in the meantime in an effort to “fix our broken political system.”

“Over 70 percent of elected positions have only one candidate competing for them, and the two major parties have shut out competition,” the group states.

The new party hopes to fix this by giving Americans other options through ranked choice voting and open primaries.

The party hasn’t yet outlined any specific policies.

Yang left the Democratic Party in October 2021, stating at the time that he felt confident that it was the right thing to do. He also said that polarization in the United States is the worst it’s ever been.

The new Forward Party will initially be co-chaired by Yang and Christine Todd Whitman, the former Republican governor of New Jersey, Reuters reported.

RAM was founded in 2021 by dozens of former officials in previous Republican administrations and is led by former Trump White House official Miles Taylor, who also served in the George W. Bush administration.

SAM is made up of Democrats, independents, and Republicans and is chaired by former Rep. David Jolly (R-Fla.).

The original Forward Party was founded by Yang in October 2021.

Former Rep. Joe Sestak (D-Penn.), Rev. Ira Acree of Chicago, and many others are also part of the Forward Party’s “leadership circle” Yang noted, with more expected to join in the future.

Yang told Reuters that the Forward Party will start with a budget of roughly $5 million and has donors lined up, along with hundreds of thousands of grassroots members spread across the three groups.