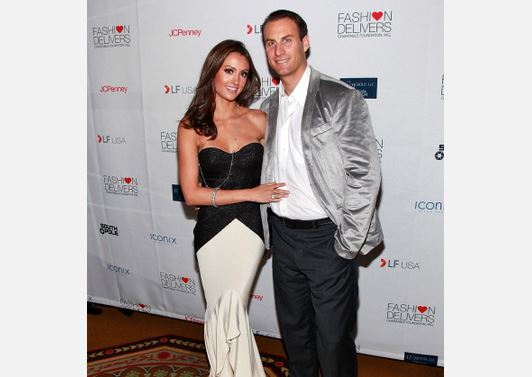 Andrew Stern, the husband of “Deal Or No Deal” suitcase model Katie Cleary, is dead after committing suicide.

The pair were going through a divorce.

Stern shot himself in the head over the weekend while at a shooting range in the San Fernando Valley in California, law enforcement sources told TMZ.

The 40-year-old businessman was married to Cleary, who was also a contestant on America’s Next Top Model.

The gossip blog notes that photographs of Cleary with Leonardo DiCaprio and Entourage star Adrian Grenier surfaced recently and said that officers who interviewed various people after the suicide–including Cleary–were told that Stern was suffering lots of stress over marital problems.

Cleary hit back at the way the death was linked to the photos.

“Katie and Andrew have been separated and in the process of finalizing their divorce for a few months and her relationship with Leonardo and Adrian were simply platonic as she was there to promote her animal welfare documentary Give Me Shelter. We respectfully request her privacy be given at this difficult time and have no more comments on this matter.”

A close friend of the couple added to People:

“Andrew and Katie have been in the midst of a very amicable separation and had remained on excellent terms. This is devastating news for us but we have been aware of Andrew’s longtime struggle with depression.”