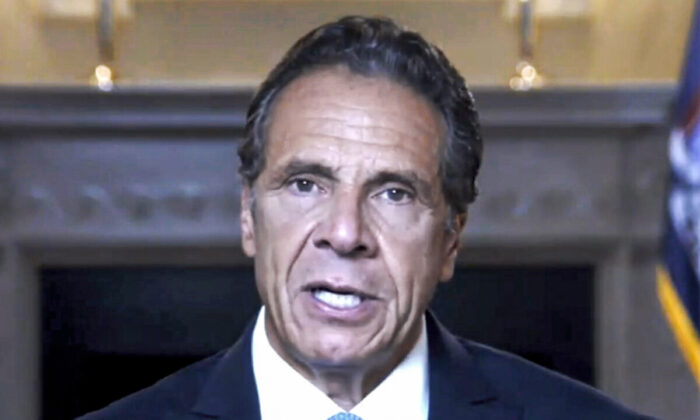 Former New York Gov. Andrew Cuomo had his book deal revoked by the state’s ethics board on Tuesday.

New York’s Joint Commission on Public Ethics (JCOPE) approved a resolution (pdf) 12–1 to rescind its decision that approved Cuomo to write “American Crisis: Leadership Lessons from the COVID-19 Pandemic” while he was governor during the coronavirus pandemic.

Cuomo will now be forced to file for approval again following the decision.

If the new approval is not granted, JCOPE could force the former governor to repay a portion or all of the $5.1 million contract he received for the book from Crown New York publishing.

“Contrary to the representations made on behalf of Gov. Cuomo and not disclosed to the commission, state property, resources and personnel—including staff volunteers—were used in connection with the preparation, writing, editing and publication of the book,” the resolution said in part.

JCOPE said Cuomo’s proposal was rescinded as the COVID-19 focused book was largely connected to his service as the state’s governor.

Cuomo’s response to the decision included an announcement planning legal action against the board.

Cuomo spokesperson Rich Azzopardi released a statement in response to the decision to New York’s WABC-TV.

“These JCOPE members are acting outside the scope of their authority and are carrying the water of the politicians who appointed them. It is the height of hypocrisy for (Governor Kathy) Hochul and the legislature’s appointees to take this position, given that these elected officials routinely use their own staff for political and personal assistance on their own time,” the statement read.

“This is the 3rd time JCOPE has attempted to rescind their own approval, and this amounts to nothing more than Albany political corruption at its worst. JCOPE wants to rescind an approval that was relied upon to play a political game and that means a JCOPE opinion cannot be relied upon by anyone and is subject to political winds.

“Our counsel’s request to JCOPE was clear, saying ‘no government resources’ would be used—consistent with that representation, people who volunteered on this project did so on their own time. Furthermore, the governor cannot be held responsible for internal decisions over recusals and approvals made by JCOPE. They truly are a J-JOKE,” it added.

The New York Post also reported that Democrat Gov. Kathy Hochul’s four new appointees to the committee, including chairman Jose Nieves, all voted in favor of rescinding the approval of Cuomo’s book contract.