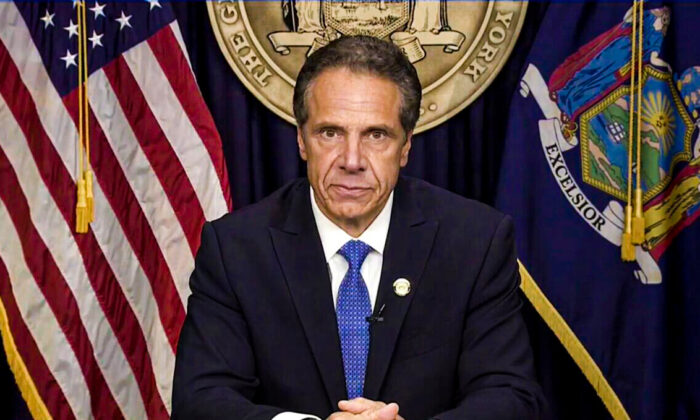 A New York ethics board ordered former Gov. Andrew Cuomo to return the proceeds he received for a book about leadership during the COVID-19 pandemic.

The state Joint Commission on Public Ethics (JCOPE) voted 12 to 1 Tuesday on a resolution that mandates Cuomo, a Democrat, to hand over the profits he made from the book “American Crisis: Leadership Lessons from the COVID-19 Pandemic,” to New York Attorney General Letitia James’s office.

The move comes about a month after the same commission voted 12 to 1 to revoke its approval of Cuomo’s book deal. The panel determined that the former governor violated the terms of the agreement because New York state property was used to write, edit, and publish the book.

Local media reports have said that Cuomo’s book deal was worth more than $5 million.

Following Tuesday’s vote, Cuomo attorney Jim McGuire said the Joint Commission on Public Ethics vote was “unconstitutional” and exceeds “its own authority and appear to be driven by political interests rather than the facts and the law.”

“Should they seek to enforce this action, we’ll see them in court,” he told local media outlet 13WHAM.

“This is unprecedented territory because nothing like this ever happened before,” Blair Horner of the New York Public Interest Research Group, a nonprofit organization, said in a statement Tuesday. “No one in their wildest dreams thought a sitting governor—the highest-paid governor in [the] country—would go out and get a $5 million book contract.”

In August, Cuomo resigned from his post as New York’s governor on Aug. 24 after an investigation from the New York Attorney General’s office found that Cuomo allegedly harassed several women. Cuomo has vehemently denied the claims, explaining that he resigned because the allegations would keep him preoccupied from doing his job as governor.

A report by a New York Assembly committee found that the former governor required his aides to help produce his COVID-19 memoir during work hours, even recording the book’s audio version at the state’s Executive Mansion in Albany. The committee had been considering impeachment articles against Cuomo before he resigned.