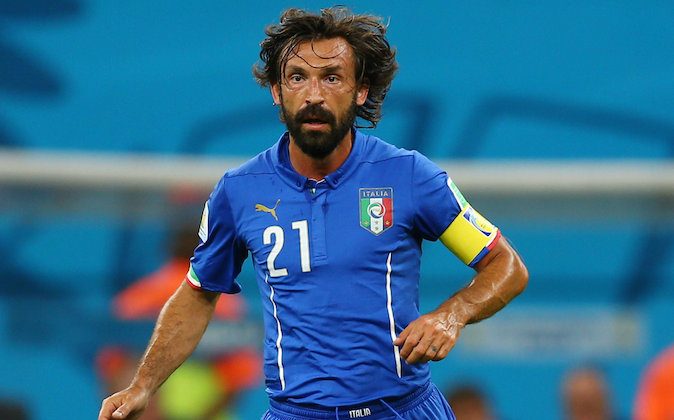 Andrea Pirlo Net Worth: How Much is Azzurri, Juventus Player Worth?

Andrea Pirlo is arguably one of the most famous Italian players today, but what’s his background, and how much is he worth financially?

Pirlo made his footballing debut for Italian team Brescia at the age of 16, and subsequently signed for Internazionale after he was spotted by coach Mircea Lucescu.

To top it, Pirlo was part of the Italy team that won the 2006 World Cup in Germany.

Eventually, Pirlo moved to Juventus in 2011, where he remains till today, playing impressive football at the age of 35.

Pirlo has played in a variety of central midfield roles, and most recently, has found his “niche” as a deep-lying playmaker, spraying long diagonal passes to his team-mates.

According to CelebrityNetworth, Pirlo is worth $30 million.

Here’s an AP article on Italy and Costa Rica.

MANGARATIBA, Brazil (AP) — Costa Rica’s 3-1 impressive win over Uruguay was one of the biggest surprises in the opening matches of the World Cup.

It certainly got Italy’s attention.

“That alarm bell could be an advantage for us,” Azzurri midfielder Daniele De Rossi said. “It should help us enter prepared like we did against England. If they had lost 3-0 or 4-0 to Uruguay maybe we wouldn’t. But now I’m sure that won’t happen.”

Coming off an impressive 2-1 win over England, Italy faces Costa Rica on Friday at the Arena Pernambuco in Recife.

“It’s a squad that surprised everyone,” De Rossi added. “Nobody expected them to beat a big team like Uruguay so handily.”

Costa Rica and Italy each have three points but the central American side tops the group on goal differential. A win for either Italy or Costa Rica would just about assure a spot in the next round.

Italy will be wary of Costa Rica forward Joel Campbell, the 21-year-old who scored one goal and set up another against Uruguay.

“I faced Campbell with Olympiakos in the Champions League and he already impressed me then,” Italy goalkeeper Salvatore Sirigu said.

While Sirigu performed admirably against England, he could return to the bench with captain Gianluigi Buffon working his way back from left ankle and knee injuries.

Italy coach Cesare Prandelli will also probably make a change in defense, with Giorgio Chiellini moving over from left back to take over for Gabriel Peletta in the center and Ignazio Abate coming on at fullback. In midfield, Brazilian-born Thiago Motta could replace De Rossi, who had neck pain after the England game.

The match will kick off at 1 p.m. local time (Noon EDT/1600 GMT) and — depending on the weather — that could mean playing under a scorching sun.

“Last year we played Japan in Recife at 9 p.m. and we were dying,” De Rossi said, recalling how the Azzurri struggled to overturn a two-goal deficit and beat Japan 4-3 in a wild Confederations Cup match. Costa Rica is “more accustomed to this climate but I think both squads would accept time outs.”

Italy was upset that time outs were not invoked during the England game in Manaus, although FIFA explained that the heat level wasn’t high enough to warrant breaks.

The Italians combatted the heat in Amazon jungle city by relying on a high-percentage passing strategy and minimal running. Expect more of the same against Costa Rica, which also boasts PSV Eindhoven forward Bryan Ruiz at playmaker.

“Their forwards are very agile and physical like England’s,” De Rossi said. “We need to play a similar match to the one we played against England. They know how to defend in one unit and they have quality up front, especially at center forward.”

It’s only the second meeting between Italy and Costa Rica, with the Azzurri having won a friendly 1-0 before the 1994 World Cup. But helped by Costa Rica’s performance against Uruguay, Italy is studying its next opponent attentively.