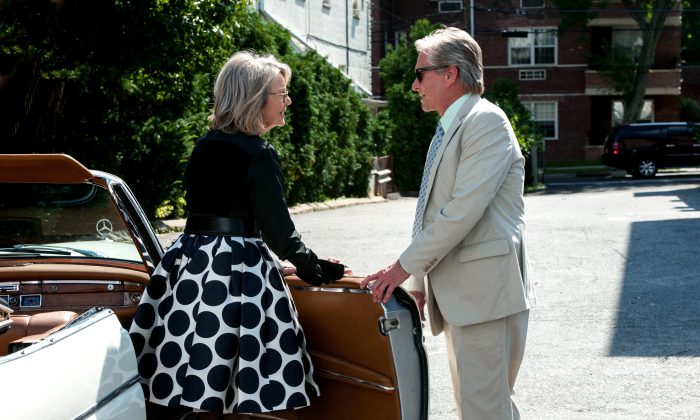 Diane Keaton and Michael Douglas in “And So It Goes.” (Clarius Entertainment)
Entertainment

‘And So It Goes’: We Expected More of Rob Reiner

Boxers past their prime often don’t know when to quit. It happens to the greatest. It happened to Ali. It’s a good thing Rob Reiner’s not a boxer.

In any case, Reiner’s latest, “And So It Goes,” has the same effect of watching the aged Ali getting punched in the face by Larry Holmes; it’s slightly wince-worthy to know that much lesser talents are funnier than Reiner these days. He either needs to go back and get the “eye of the tiger,” or hang up the gloves and throw in the towel.

He’s a realtor who wants to make one last big sale and retire to Vermont. He’s mean. He shoots stray dogs on his properties with paintball guns.

His former-addict son had a daughter (Sterling Jerins), whom he wants to dump on dad for the summer, because he’s going to jail.

So son dumps daughter, and dad’s not thrilled. As granddad, Oren in turn dumps granddaughter on sad neighbor lady Leah.

Leah’s life is such that she’s trying to be a lounge singer, but her between-song patter is very Debbie Downer. Invariably she ends up talking about her dead husband, which leads to blubbering, which leads to running offstage.

Oren decides that Leah needs an agent (since she’s doing the heavy lifting, taking care of his grandkid), and since he’s a real estate agent—how hard could showbiz agenting be? So Oren gets her some gigs.

And that’s all nice and cute, if also cloying and ho-hum. But then they have to go and drink some wine, and then of course she has to go and invite Oren over, and then things get quickly out of hand.

Is that a sexy scene? Do you want to see that scene? Septuagenarian tonsil-hockey with jowliness? Not to offend happily married 70-somethings everywhere. Congratulations on the longevity of the union!

The problem is not about an old-folks makeout session. It’s that there hasn’t yet been enough time for Oren to become a redeemed, ex-mean-tempered old guy who says cliché, disgusting, grumpy-old-man stuff. He’s in randy-old-goat mode.

The reviewer likes to play the fun game of “Let’s see who’s enjoying this?” with the screening audience. He sneaks a peek.

Next to him sat two 60-something heavily perfumed, bouffant-wearing dames from Jersey. Hardcore Michael Douglas fans probably. They hated this scene. Looked like they’d eaten half a lemon each. Rob Reiner! Stop that!

This is the guy who made “The Princess Bride,” “Spinal Tap,” and one of the reviewer’s all-time faves—”Stand By Me.” And now this.

Amazingly, Diane Keaton does manage to retain her dignity. The woman is amazing. She even got naked, at age 57, in “Something’s Gotta Give,” and still maintained her dignity. How does she do that? Like Bill Clinton was the Teflon president, Keaton is the Teflon actress-of-a-certain-age.

So where were we? Oh yes. Bit by bit, little by little—Oren learns to love. Isn’t that nice? What have we learned? That we have no idea what the title of this movie means: “And So It Goes.” And that Rob Reiner needs to wake up at 4 a.m., drink 12 raw eggs, punch a slab of meat, wear a sweat-stained hoodie, holler “Yo, Adrian!” and get the eye of the tiger back.