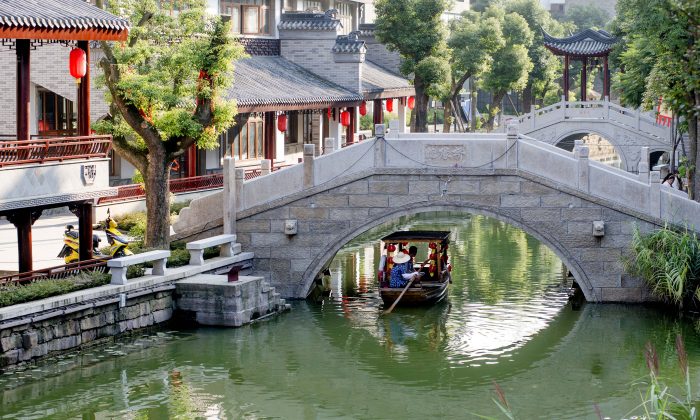 The Longtan Canal Town, built in the style of the "Dream of Red Mansions," in Chengdu City, Sichuan Province, China. (The Epoch Times)
China

The scenic village in the Southwestern Chinese city of Chengdu designed to replicate the buildings and streets depicted in the famous 18th century Chinese novel, “Dream of Red Mansions,” has failed to attract enough visitors despite local authorities spending nearly 2 billion yuan (roughly $295 million) to create the antique town.

Today, it is a ghost town.

According to a Feb. 11 report by Chinese news portal Sohu, the Longtan Canal Town, located inside the Chenghua district of Chengdu, covers an area of 36.3 acres. It was a megaproject that took four years to complete, opening to much fanfare in 2013.

The major components of the ancient town are three independent islands. Using the surrounding water sources, water was diverted into the project site to form a flowing lake, 39.4 feet wide and 4.3 feet deep. There are 23 southeastern-Chinese style mini bridges connecting the land with the islands.

The north gate at the entrance has exquisite designs and patterns carved onto its beams and rafters, however, no visitors are there to admire it. The front desk and seats inside the visitor center are covered with a thick layer of dust. Outside, near the pavillion, two boats floating on the waterway seem to have been deserted for a long time, as the sails are worn out, according to the Sohu reporter who visited the man-made town.

Except for a few retailers, most shops, also done in traditional 18th century design, are closed. Tables and seats for the street food stalls are abandoned on the street, broken and dusty.

A local elderly man who was taking a walk in the neighborhood told the reporter: “I usually come here for a walk after lunch. It has been like this for almost five years now.”

He noted that there is very little foot traffic during the day, and lamented that so much money had been spent on this under-utilized project.

A taxi driver who has lived in Chengdu for more than 20 years said that other than the unique architecture, the canal town doesn’t have much else to offer, as the dessert and tea houses here are no different from those found in other parts of Chengdu. In addition, the prices here are higher.

The chair of the project’s Development Management Committee, Li Wei, told Sohu that the original plan was more ambitious. It was aimed at building a new city that could accommodate 100,000 people who would work or live in the area. However, local officials changed the plan afterward and decided to turn it into a cultural tourism park.

But local retailers are now suffering due to the lack of business. Most of the surrounding areas is industrial plants, while the number of nearby residents is very little.

“I have been waiting for 6 years!” said a restaurant owner, who spent 1 million yuan (about $148,000) to renovate his restaurant at the beginning, and pays 20,000 yuan of rent every month. “Right now I can barely make enough to cover my rent. I am anxious to see further developments here to make it a popular spot,” he said.

Since the 1990s, many areas of China have started construction frenzy to build imitations of Western architectural styles such as those found in Rome, London, and Florence. But many have become deserted over time.

Chinese netizens expressed outrage at the news of the abandoned Chengdu town.

“Someone made a hasty decision. Then 2 billion yuan is gone. Who will be held responsible for this?”

“Such projects all end up being a huge waste of taxpayers’ money, but they are still going on everywhere. In my hometown, local developers are also building a canal town,” one wrote.

“Lack of history and real culture, these imitations are just a waste of money,” another wrote.