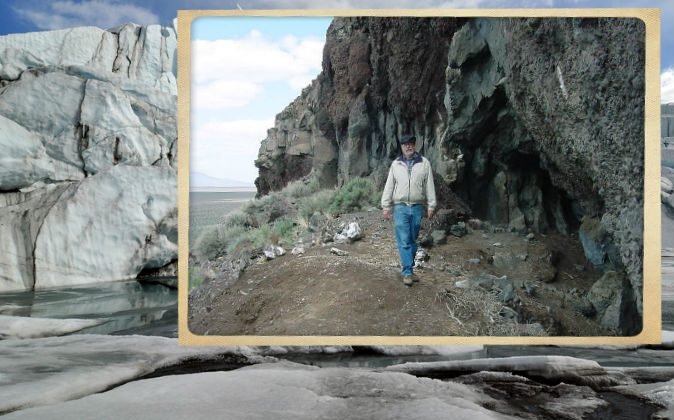 Bill Cannon, archaeologist with the Bureau of Land Management (BLM), walks by the Paisley Caves in Oregon. The human remains in these caves suggest an ancient human population reached what is now the United States at the end of the last Ice Age. (BLM/Wikimedia Commons) Background: A file photo of a glacier lake. (Shutterstock*)
archaeology

A network of caves in rural Oregon, known as the Paisley caves, may contain archaeological evidence of the oldest definitively-dated human presence in North America, according to a Reuters news release.  The site was first studied in the 1930s, but new scientific excavations and analyses have uncovered significant discoveries that suggest an ancient human population reached what is now the United States at the end of the last Ice Age.

Evidence comes from radiocarbon dating of more than 200 samples of coprolites (fossilized human feces), which were found in a stratigraphic layer in one of the Paisley caves that was at the same level as a small rock-lined hearth some 7 feet (2 m) below the modern surface. At that level was also discovered a large number of bones from waterfowl, fish, and large mammals including extinct camel and horse.

The coprolites were dated to 14,300 years old, which is 1,000 years before the human settlement evidenced in the Clovis era. The Clovis culture, refers to a prehistoric culture that inhabited the Americas from around 13,500 years ago, named after sites discovered near Clovis, New Mexico.  They were once believed to be the first inhabitants of the Americas, but a number of findings over recent years have challenged this hypothesis, including the latest discovery in the Paisley caves.

Dennis Jenkins, director of the University of Oregon Archaeology Field School, said the test findings provide “significant new information regarding the timing and spread of the first settlers in the Americas.”

“The people living there 14,300 years ago were gathering and consuming aromatic roots, for which they would have needed special knowledge that would have developed over time,” said Jenkins.

The significance of the findings in the Paisley caves have now been officially recognised, prompting the U.S. National Park service to add the Paisley Five Mile Point Caves to its list of nationally important archaeological and historical sites.