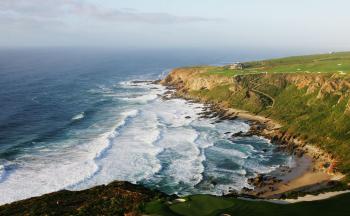 Old Ancient Chinese Wisdom: The Ocean is Broad and Vast

Lin Zexu, a prime minister during the Qing Dynasty, [the final dynasty, c. 1644 – 1914] went down in history as the one who banned the use of opium.

He wrote out very colorful verses, replete with meaning, and affixed them everywhere throughout his home. One of the verses read, "An ocean is the receptacle for many river deltas, and is broad and vast. A wall constructed of iron and bronze stands solid and cannot be breached: it is indomitable, without intent or ambition.”

The first part inspired him to listen with attention, and to graciously tolerate differing attitudes and viewpoints. This helped him to develop an invincible stance. The second part admonished and reminded him, as a high-ranking official, to refuse to succumb to any desires and cravings. This helped him to maintain justice, while remaining strong and righteous.

People admired the spirit of Lin's tolerance, and considered his life’s story a lesson to be passed down for future generations.

To treat others with tolerance and forgiveness is a virtue that he proved, through example, can accomplish grand things.

Displaying tolerance towards others might be just the impetus someone needs to awaken their special talents or abilities, and strengthen positive attributes. A broadminded person examines himself constantly to ferret out shortcomings, but never mentions the faults of others! Thus, the mind is enabled to rise to loftier realms.