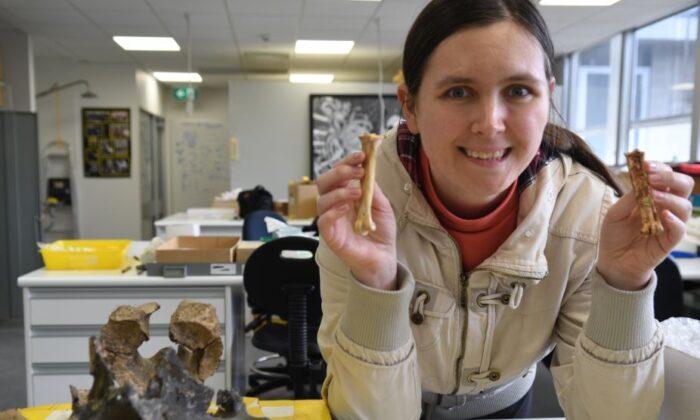 Ancient Bird Species Unearthed More Than a Century After Excavation

Researchers from Flinders University and the South Australian Museum have finally corrected the record on a misclassification that has lasted more than 100 years old after unearthing Australia’s first fossil vulture, the Cryptogyps lacertosus.

The fossilizinitiallys originally classified as the eagle, Taphaetus lacertosus, in 1905 by Charles Walter de Vis, an English ornithologist—studier of birds— who thought that the bird was a distant relative of the wedge-tailed eagle. However, in the late 1900s paleontologists began to question the classification and consider the possibility that the fossil actually belonged to another bird species, the vulture.

“Today, we’re familiar with a wedge-tailed eagle picking at a kangaroo carcass on the roadside,” said the lead author, Ellen Mather from the Flinders University Palaeontology research lab, in a news release by the university.

“Thousands of years ago, a very different bird would have filled the role of carrion consumer—one most people would now associate with the plains of Africa.”

Old World vultures are known to populate Europe, Asia and Africa, whilst new world vultures live in the Americas. Australia is the only continent to not have a vulture population at present.

The research team made the discovery using multiple fossils found across the 20th century from around Australia, with first Cryptogyps lacertosus fossil—a wing bone fragment— excavated in 1901 near Kalamurina Homestead on the Warburton River in South Australia.

However, in an email to The Epoch Times, Mather said that currently, the researchers do not have a complete fossil skeleton of the extinct bird.

The limited collection of fossils restricts the researchers’ knowledge of the vulture, they cannot know precisely what the bird looked like or ate. Although they do hypothesize that the vulture may have feasted on either the inner and softer parts of a carcass or the tougher outside, eating the muscle and skin.

Uncovering the Vulture Behind the Eagle

Mather said that, by comparing the fossils they had discovered to the bones of birds of prey from around the world, the research team confirmed that the extinct bird was not an eagle or a hawk. The bird did not have the adaptions of a hunter, as the lower leg bone features were too undeveloped to have supported the musculature that is required to kill prey.

“Unlike eagles, vultures rarely use their claws to kill prey. This means that the musculature of their legs is very different, and this is reflected in the shape of the bones.”

“The tarsus of a vulture has shallower, smaller muscle scars and less projection of bone structures for muscle attachments compared to eagles.”

She said that the vulture classification was further established when they placed the fossilized bones in a graph mapping biological descent.

Mather said that the leg bones better denote vulture fossils rather than the spine because although the posture is clear in life, the spine of fossilized birds is not often found in a connected state.

“Most of the time, we might find an isolated vertebra, several if we’re lucky. That’s not to say that there aren’t useful features in vertebrae, but we have yet to find any from our fossil vulture.”

“The leg bones, in comparison, are more commonly preserved and also very useful as they can give a lot of information about how a bird moves and hunts. Or, in the case of our fossil, does not hunt.”

The vulture lived sometime during Australia’s late Pleistocene period or Ice Age, between 50 to 500 thousand years ago; its discovery highlights the diversity of the megafauna and other creatures in Australia during this time. This bird would have lived alongside creatures such as the diprotodon— a huge herbivore marsupial that resembles a giant wombat— and the thylacoleo— a carnivorous predator that is commonly known as the marsupial lion.

“The discovery solves a mystery of what happened to so many megafaunal carcasses when the continent didn’t have vultures,” said Senior author and Flinders University Associate Prof. Trevor Worthy. “Now we know they were here. They’ve been hidden in plain sight.”

Mather said in the Conversation article that the extinction of the vulture is likely related to the extinction of Australia’s megafauna. As these creatures died off 60 to 40 thousand years ago, researchers believe that the bird’s food source—animal carcasses—would have become increasingly limited with the change leading to starvation, reduced breeding success and eventually pushing the species to extinction.

“This discovery also reveals that the diversity of our predatory birds was much greater in the past. More significantly, the extinction of vultures in Australia has major ecological implications,” Mather said.

“Vultures play a very important role in ecosystems by accelerating the consumption of carcasses and reducing the spread of diseases.

“The loss of Cryptogyps could have caused a drastic upheaval in ecosystem function for a very long time as other species scrambled to fill in its niche.”

In Australia, these species were other birds of prey, such as the Wedge-Tailed Eagle and the Black Kite.