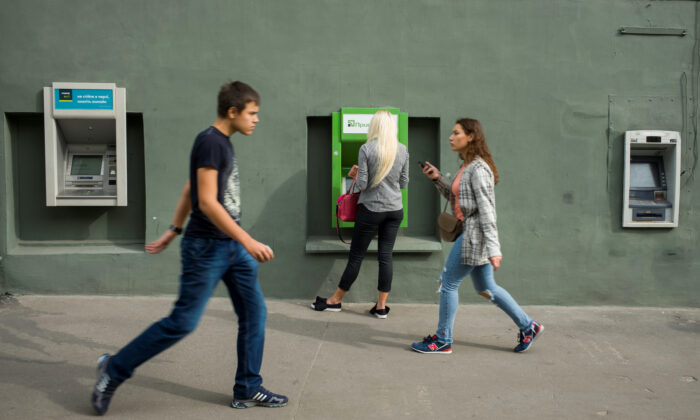 A woman uses an ATM machine as people walk past in central Kharkiv, Ukraine on Sept. 18, 2018. (Gleb Garanich/Reuters)
Economy

KYIV—Ukrainian inflation probably accelerated further in September, fuelled by rocketing gas prices on external markets, but it may slow down by the end of 2021 thanks to government and central bank measures, a Reuters monthly poll showed on Thursday.

According to the median forecast of Ukrainian analysts, September inflation reached 10.7 percent year-on-year from 10.2 percent in August. The highest estimate predicted a rise to 11.5 percent.

Ukraine imports more than a third of the gas it consumes and about half of the petrol.

“Food and energy prices in global markets remain quite high. Additional nervousness is created by the incessantly rising prices for natural gas in Europe,” analysts of the Ukrainian subsidiary of Raiffeisen bank, which took part in the poll, said in a separate report.

They said it “generates additional risks of persisting high inflation.”

In September, the central bank raised its main interest rate to 8.5 percent from 8.0 percent, the fourth hike in 2021, aiming to bring inflation back into its target range of around 5 percent.

The majority of members of the central bank’s monetary policy committee believed the current interest rate level would be enough to reverse the upward inflationary trend.

The analysts polled by Reuters forecast inflation to slow to 9.5 percent by the end of 2021 as a result of tighter monetary policy and the government’s decision to cap gas and electricity tariffs for households until the end of the heating season in April.