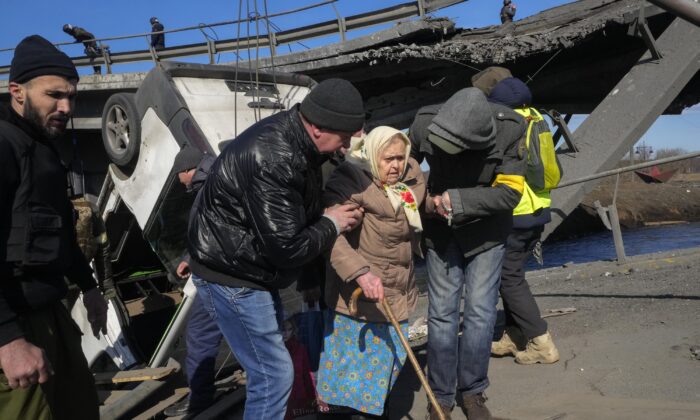 Volunteers pass an improvised path under a destroyed bridge as they evacuate an elderly resident in Irpin, some 16 miles northwest of Kyiv, Ukraine, on March 11, 2022. (Efrem Lukatsky/AP Photo)
Russia-Ukraine War

Melanie Sun
Melanie is an Australian-based reporter and editor covering world news. She has a background in environmental research.
View profile
Follow
and Kevin Hogan

Analysts are observing how well informed Russian President Vladimir Putin is of the real situation in Ukraine, over concerns that he could be making decisions in the war without accurate updates as information filters through the ranks, said Odessa-based Volodymyr Dubovyk, an associate professor with the Center for International Studies at Ukraine’s Mechnikov National University.

“He might really think that Russians are winning, having an upper hand in Ukraine,” Dubovyk said of Putin’s view of the conflict from Moscow.

But they are not winning, Dubovyk said of the Russian forces, adding that it is unclear whether there is anyone to advise Putin of the real situation on the ground.

“People are afraid [that] … no one is there to tell him the news that, ‘Mr. President … we need to withdraw, we need some exit ramp,’” the academic said. “And Putin, of course, is not known [to be] someone who is a quitter. He got himself up on that escalation tree, and he doesn’t know quite well how to climb down.

“But he will have to learn to do that because he is not going to get his objectives met here in Ukraine,” Dubovyk told NTD News on March 11.

Russia has said its “special military operation” in Ukraine is to disarm Ukraine’s military and topple its “neo-Nazi” government in order to protect Russians living in pro-Russian parts of eastern Ukraine from “abuse and genocide.”

“Once again, I speak to the Ukrainian soldiers,” Putin said in his speech announcing the invasion. “Do not allow neo-Nazis and Banderites to use your children, your wives, and the elderly as a human shield. Take power into your own hands. It seems that it will be easier for us to come to an agreement than with this gang of drug addicts and neo-Nazis.”

The Kremlin is demanding Ukraine sign a neutrality agreement that would prohibit it from entering NATO, and that it recognize Crimea as Russian, recognize the regions of Luhansk and Donetsk as independent, and cease all military action.

Despite the difficulties facing Russian troops in their mission to demilitarize Ukraine, Dubovyk believes the Russian leadership still wants to continue to fight the war.

“I think [Russia] still believes they might bring some reinforcements and provide more gasoline and food to the troops who are locked down in various places in Ukraine. I think they might be trying to proceed that way,” he said.

Although Russia attacked and destroyed much of Ukraine’s military assets in the first 48 hours of the invasion, Dubovyk said that the Ukrainian people have held strong in their resistance of the occupying forces, supported by foreign assistance to their military and sanctions from countries like Western NATO allies, but also South Korea, Japan, and Taiwan in the East.

The Ukrainians also have the upper hand of a higher morale, because the people are fighting to defend their land and their freedom, Dubovyk said.

“Many of them left their families and their kids in the towns and cities behind their backs. So it’s not some abstract conflict to them; they know exactly what they’re defending, they know what’s going to happen to those towns,” he said.

Meanwhile, on the Russian side, Dubovyk said that according to Ukrainian investigators’ version of events, “morale is really low.”

The investigators, hearing from some of the 2,000 Russian prisoners of war, have reported that many Russian soldiers are questioning the war.

Dubovyk said that some common themes reported from conversations with PoW have been: “Why are we here? What are we doing? They are no fascists here … these people are just civilians and the Ukrainian military is fighting bravely against us because they see us as invaders.”

He also said some PoW were thinking, “Our officers, they told us we will be seen as liberators, that people will come out to us with flowers, and they will congratulate us as [people] who brought them freedom.”

But, he said, they soon realize that Ukrainians have been fighting for their freedom against the occupying forces.

“Some of those troops that Russians brought in are professionals with a lot of experience, but many of those are not, they are 18-, 19-, 20-year-old guys, rookies, who have been brought [in] without any experience and they are terrified,” Dubovyk said. “They’re leaving their weapons and are deserting, they are destroying their own equipment, their tanks, and they’re trying to escape toward the border with Russia and go back to Russia.”

Russia’s advances have been varied across Ukraine. Some cities in the east near the long-contested Donbass region, like Mariupol, are now in a terrible situation following days of bombings and food and power shortages.

Ukrainian government forces and Russian-backed separatist forces have been at war in the Donbass since 2014. Over 14,000 people had already died in the armed conflict before Russia’s invasion on Feb. 24, with roughly 75,000 troops fighting in trench warfare along a 260-mile-long line of contact through some densely populated areas.

In the current escalation, Ukrainian cities in the north, west, and some in the south like Odessa remain mostly untouched.

Dubovyk put Russia’s slow progress down to Ukraine’s strong civilian resistance, without which the Ukrainian military would be failing to resist the Russian offensive.

There are tens of thousands of ordinary Ukrainians who are working with the military to support the defense of the country, Dubovyk said, performing important duties like evacuating people, distributing food and water, and diverting Russian pre-planted sabotage groups that were sent into Ukraine before the invasion.

The invasion is now dragging through a third week. For days, Russian forces had been lined up just tens of miles away from the Ukrainian capital of Kyiv, but for now appear to have dispersed. It remains unclear what they were waiting for before dispersing, although Dubovyk said it could be that the Russian forces have now realized how difficult it will be to take and hold Kyiv, given the strong resistance put forward by the Ukrainians in defense of their homes and land.

“[The Russians are] really afraid of going into the city because they are afraid of urban warfare. They know that city was very much fortified, that people have all these javelins and attacking machine guns and so on. And they would expect firing from every window and from around any corner,” he said.

He noted that unlike what was seen in Afghanistan, Ukraine is “not a failed state.”

“In [the] case of Ukraine, the government is working under the bombs, in the shelters, everyone is showing up to work including medical personnel, including professors in universities, we even do our lectures online these days. So Ukraine is very much united.”

Dubovyk warned that he thinks Russia “will try to force more concessions and inflict more pain on Ukraine by shelling civilian targets” if the conflict continues unresolved.