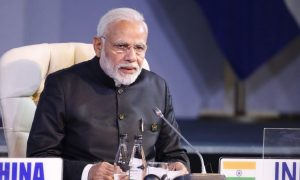 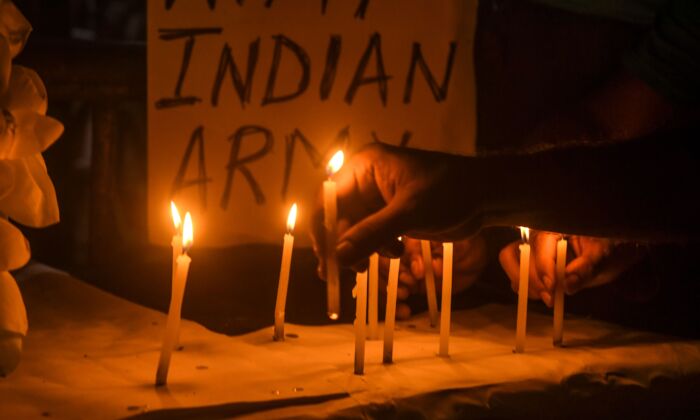 Congress workers and supporters light candles to pay tribute to the soldiers who lost their lives following a recent clash between India and China, in Kolkata, India, on June 17, 2020. (DIBYANGSHU SARKAR/AFP via Getty Images)
Chinese Regime

The China and India border tensions recently intensified, leading to clashes that have resulted in casualties on both sides.

The Ladakh region in the Himalayas has been disputed by the two countries since 1962.

As of June 17, Indian officials confirmed that at least 20 Indian soldiers died amid clashes in the Galwan Valley. The Chinese side admitted to casualties but refused to release numbers.

Violent face-offs began in May, and the two countries agreed in early June to peacefully resolve the conflict.

But clashes erupted on the night of June 15, and on June 16, China’s People’s Liberation Army (PLA) launched a military live-fire exercise in the region, according to a PLA announcement.

Indian casualties included a colonel. The Indian side claimed that the clash was triggered by Chinese troops who built a temporary post on the Indian side. Meanwhile, the Chinese regime claimed that Indian forces crossed the Line of Actual Control (LAC)—a poorly demarcated line that separates the two sides—to provoke and attack Chinese army.

Both sides fought each other with rocks and clubs. Indian officials said that Chinese soldiers used clubs studded with nails, which increased the lethality.

China and India share a border more than 2,100 miles long and have a number of overlapping territorial claims.

India and China went to war in 1962 over a border dispute, which ended with a ceasefire agreement. China retained control of much of the Aksai Chin plain. The two countries’ armies have been eyeball-to-eyeball at their border but insist no bullet has been fired in the past four decades.

This is the first fatal clash between the world’s two most populous nations in about 45 years; the last one occurred on Oct. 20, 1975, when four Indian soldiers were ambushed and killed by Chinese soldiers as they were patrolling at Tulung La in Arunachal Pradesh state.

Soon after, the two nuclear-armed neighbors had stand-offs in at least three locations in the Ladakh region: Galwan Valley, Hot Springs, and Pangong Lake.

Jeff Smith, researcher at U.S. think tank The Heritage Foundation, said the conflict will likely fuel anti-Chinese sentiment in India. “For the Indians, it is unlikely this will be brushed aside or easily forgotten. Anti-Chinese sentiments were already running high in Delhi before the outbreak of violence,” he said in an email to The Epoch Times on June 17.

Smith said the Chinese regime has deployed “coercive tactics” in its territorial disputes in the East China Sea, South China Sea, and the India border. “The China-India border was once thought to be among the more stable of these fronts. It may be time to revisit that thinking.”

Meanwhile, James Carafano, vice president of the Kathryn and Shelby Cullom Davis Institute for National Security and Foreign Policy, speculated that the Chinese regime may have escalated the conflict because it’s “worried about looking weak.”

“Or maybe Beijing is facing more internal pressure than we suspected. After all, China’s economy has suffered a massive 6 percent drop in output, the first negative economic statistic in over 15 years,” he wrote in an opinion article published on Fox News on June 17.

The Chinese regime has kept mum on the recent clash.

At a June 17 press conference, Zhao Lijian, spokesman of China’s foreign ministry, said: “I don’t need to release any info to you since both armies are dealing with the detailed issues onsite.”

Zhao then read out a statement from the PLA’s Western Theater Command, whose jurisdiction covers regions near the India border. “The sovereignty of the Galwan Valley has always belonged to China,” the PLA claimed.

On June 16, Hu Xijin, chief editor of the Chinese state-run Global Times posted on Twitter, “Based on what I know, Chinese side also suffered casualties in the Galwan Valley physical clash.”

Hu claimed that the Chinese regime didn’t release the number of casualties because “the Chinese side doesn’t want people of the two countries to compare the casualties number so to avoid stoking public mood [sic].”