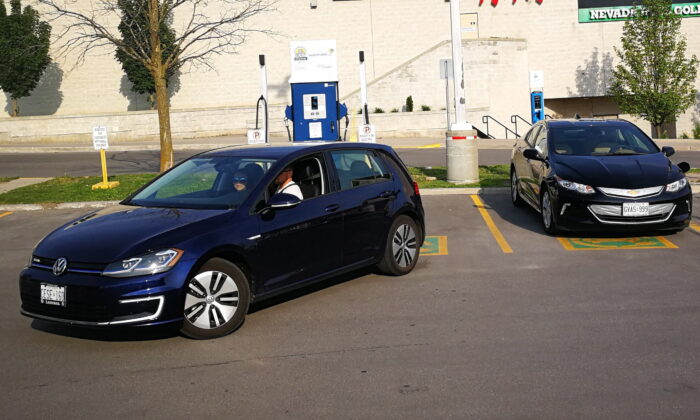 Electric vehicles are seen at a parking spot at Lansdowne Mall in Peterborough, Ontario, on June 17, 2018. The Parliamentary Budget Officer suggests that to make concerted progress toward the latest and most aggressive emissions reduction target, roughly half of new vehicle sales starting in 2022 should be zero-emission and be charged with zero-emission electricity. (The Canadian Press/Doug Ives)
Canada

Analysts are saying some of the steps required to approach 2030 climate targets come with significant economic and societal costs, especially for the energy-producing provinces, as Canada tries to reach net zero by 2050.

The Senate passed Bill C-12 on June 29, an act aimed at holding the government accountable for the goal of net-zero greenhouse gas emissions by 2050. The bill requires the environment minister to set national targets for 2030, 2035, 2040, and 2045, and also requires the finance minister to prepare annual reports.

The Parliamentary Budget Officer (PBO), the federal government’s spending watchdog, said in a June 23 report that, at a minimum, the total hit to the economy in 2030 would be 1.4 percent—roughly wiping out an entire year’s economic growth under typical circumstances. This determination comes from analyzing the impact of measures in Budget 2021 and in “A Healthy Environment and Healthy Economy” (HEHE), the feds’ new national climate plan announced last December.

Part of this adverse impact is a 16.2 percent hit to the transportation sector and a 10.8 percent hit in the oil and gas sectors.

According to Oxford Economics (OE), the economic impact by 2030 is even worse—Canada’s national gross domestic product will fall 1.9 percent below its baseline projection for 2030 even with carbon revenues fully returned to households and businesses. The hit is much worse for Alberta, at 8.2 percent, and for Saskatchewan and Newfoundland at about 3 percent mainly due to sharply curtailed oil output as demand falls.

The PBO says its estimated economic hit is more severe than the feds’ estimate based on its own HEHE modelling. The feds didn’t provide an estimated impact for its Budget 2021 measures for comparison.

Budget 2021 projected to cut emissions by 2030 to 36 percent below those of 2005, which required additional policies, some of which were unspecified. Then in April, the feds announced a further reduction, to 40–45 percent below 2005 levels by 2030, but didn’t provide policy details for reaching that goal.

Thus the PBO could not analyze how this further reduction affects the economy, but did say that while technologies to achieve this level of reduction are currently available, such as electric vehicles, small modular nuclear reactors, and heat pumps, “the scale and speed of the changes will make it challenging to achieve.”

It suggests, for example, for Canada’s fleet of vehicles, that the change required to contribute meaningfully toward the more aggressive reduction goal is that roughly half of new vehicle sales starting in 2022 be zero-emission and be charged with zero-emission electricity.

“Only a prohibitively high subsidy could achieve that objective,” the PBO said.

The PBO report distinguishes impacts from price-based measures, such as the carbon tax, and non-price-based measures that require individuals and firms to meet specific requirements, such as regulation, building retrofits, fuel standards, transportation subsidies, and carbon capture.

The report calculates an “optimistic cost” of non-price-based measures by comparing them to a price-based measure that would achieve the same emissions reduction. The PBO determined that the total of both types of measures needed to reach the Budget 2021 goal would be equivalent to an additional $211-per-tonne carbon levy by 2030 above the $50 per tonne in 2022. This would mean the carbon tax would effectively be $261 per tonne by 2030.

One of the consequences for Alberta as the carbon tax rises is an expected net migration of people out of the province, according to OE.

By 2030, OE expects Alberta’s population to fall 54,100, or 1 percent below its baseline. Most of the migration will go to Ontario and British Columbia.

OE says the most visible sign of higher carbon prices will be higher consumer prices—especially for fossil fuels.

Dan McTeague, a former Liberal MP and president of Canadians for Affordable Energy, has been blogging about Canada’s road to net zero by 2050 and says the goal is being forced on Canadians who will be paying the bill without being told the cost.

In a June 3 blog, he cites the work of former U.S. president Barack Obama’s senior Energy Department official Steven Koonin, who said in his recently published book “Unsettled” that the impact of human-induced climate change on the economy doesn’t sound like a crisis—just a modest reduction in otherwise strong economic growth.

Koonin references the United Nations Intergovernmental Panel on Climate Change (IPCC), which says, based on projections through 2100, that a possible temperature rise may hit the economy but that hit would be small relative to the average global growth rate of about 2 percent a year.

McTeague said, however, that the IPCC-predicted growth doesn’t account for the costly climate change measures being pursued. He titled his blog “IPCC Experts Say Doing Nothing Would Be Less Harmful.”

The PBO provided the caveat that its analysis doesn’t factor in any technological or productivity improvements between now and 2030 that could reduce the impacts.