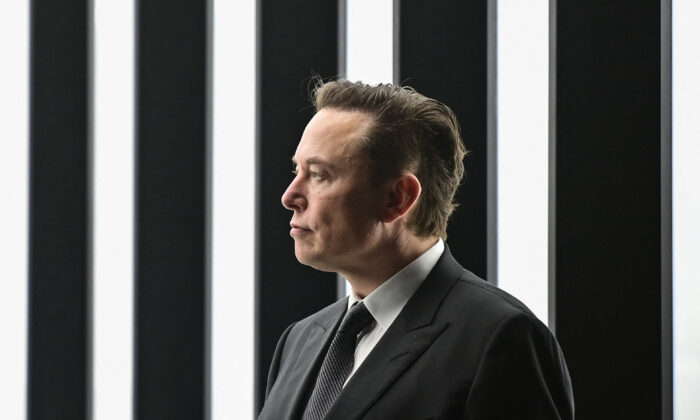 Tesla CEO Elon Musk is pictured as he attends the start of the production at Tesla's "Gigafactory" in Gruenheide, southeast of Berlin, on March 22, 2022. (Patrick Pleul/Pool/AFP via Getty Images)
Economy

Elon Musk on Tuesday disclosed in six filings that he sold $6.85 billion worth of Tesla, Inc. shares on Aug. 5. He later took to Twitter to clarify that the disposals were a preemptive move to mobilize funds to finance a “hopefully unlikely” Twitter, Inc. deal, if it is enforced and some equity partners don’t come through.

“It is important to avoid an emergency sale of the Tesla stock,” he added.

Analysts, however, had a different take on it.

At this point it is clear that Musk wants to buy Twitter and that both parties are willing to settle for a lower price, rather than going through the tedium of a trial, Future Fund founder Gary Black said on Twitter.

Black is in the camp of those who are opposed to Musk taking Twitter private.

A poll Black ran on Tuesday ahead of the disclosure of Musk’s stock sale overwhelmingly returned the response that renegotiating a lower price is the most likely outcome of the deal. He suggested a likely cut back to $50–$51 per share

Black is a Tesla bull and his firm’s flagship fund The Future Fund Active ETF has Tesla as its top holding.

Although Musk said in late April he is done with his Tesla stock sale, the situation has changed dramatically, heading into a Delaware Court trial scheduled for October, Wedbush analyst Daniel Ives said.

The Street believes that the odds are stacked against Musk winning the legal fight, the analyst said.

Given the higher chances of the Twitter deal going through, the analyst raised his fair value estimate for Twitter shares from $30 to $50.

“We can also see Musk trying to resolve this powder keg situation before the Twitter deal officially heads to court in October,” the analyst said.

At a minimum, Twitter will get a massive settlement in the $5 billion to $10 billion range that is starting to be factored into the stock, he added.

Musk having to settle or pay significant damages to Twitter, likely ranging from $5 billion to $10

Musk winning in Delaware and paying no breakup fee

In premarket trading Wednesday, Tesla stock was soaring 3.06 percent to $876, according to Benzinga Pro data.