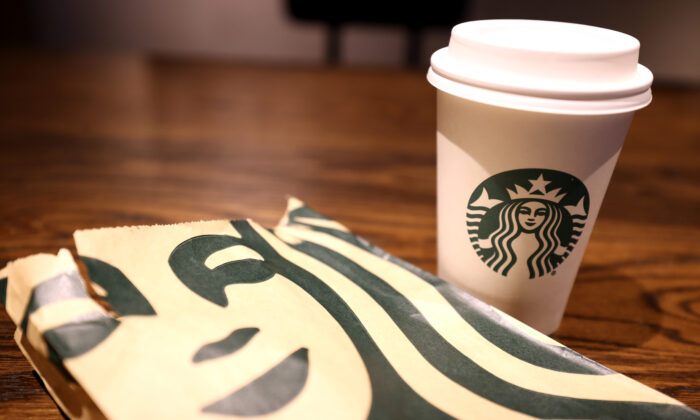 The Starbucks logo is display on a cup and bag at a Starbucks store in San Francisco, Calif., ﻿on Oct. 29, 2021﻿. (Justin Sullivan/Getty Images)
Markets

Starbucks Corporation shares bounced back on Monday after the stock received a Wall Street upgrade by an analyst who believes the stock’s post-earnings sell-off is overdone.

Stephens analyst James Rutherford upgraded Starbucks from Equal Weight to Overweight and raised his price target from $118 to $130.

In the upgrade note, Rutherford said the market is being too short-sighted when it comes to Starbucks’ raising employee wages. Rutherford said labor is currently the largest competitive advantage in the foodservice space.

“And by paying its employees more than the competition can/will pay, Starbucks is positioning itself to take market share for years,” he wrote.

Given accelerating U.S. and China comps, the Friday sell-off, and support from the company’s $20 billion capital return program, Rutherford said investors should be buying last week’s earnings dip in Starbucks.

Stephens has raised its fiscal 2022 same-store sales growth estimate for Starbucks from 8 percent to 9 percent. Stephens also cut its adjusted fiscal 2022 EPS estimate from $3.72 to $3.42 compared to Starbucks’ guidance of at least $3.40.

Other Voices From the Street

Rutherford’s upgrade comes after several other Starbucks analysts weighed in on the earnings report last week.

Cowen analyst Andrew Charles said fiscal 2022 and 2023 EPS guidance was disappointing, but he believes it is likely conservative.

“We view guidance as a new floor for the company to beat, given SBUX is in a position of strength with pricing power and plans to front-end load ~$13B of share repurchases, aided by a $6.5B cash balance,” Charles wrote.

“We view the U.S.’s 14 percent 2-yr stack in September as particularly impressive given mobility and work patterns are not yet back to normal,” Senatore wrote.

Wedbush analyst Nick Setyan said Starbucks has an extremely achievable path to long-term growth that should meet or exceed its guidance.

“We also believe it is among the best-positioned companies within the publicly traded restaurants universe to manage through near-term margin headwinds towards medium-term margin normalization,” Setyan wrote.