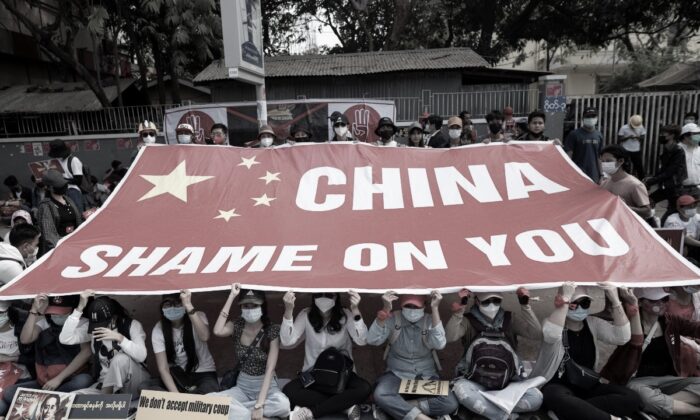 Demonstrators protest outside the Chinese embassy against the military coup in Yangon, Burma, on Feb. 19, 2021. (Stringer/Reuters)
Asia & Pacific

“China’s gas pipeline will be burned,” chanted a group of protesters in Burma (also known as Myanmar) this week on the route of a Chinese pipeline.

Hailed by the Chinese regime as a symbol of “mutually beneficial cooperation”, the pipeline has become a target for public anger over perceptions Beijing is backing the junta that seized power in a Feb. 1 coup.

The rise in anti-China sentiment has raised questions in Burma business circles and in China, not only over the surge of Chinese investment in recent years but for billions of dollars earmarked for a strategic neighbor on Beijing’s “Belt and Road” infrastructure plan.

China is a one-party state ruled by the Chinese Communist Party (CCP). China’s own citizens frequently protest the government due to a lack of an independent legal system and rights protections. However, due to threats to the safety of their families, information about the suffering of the Chinese people is largely censored by the party state.

“Chinese business, Out! Out!,” the dozen or so protesters shouted in Mandalay city, a staging point on pipelines across Burma from the Indian Ocean to China. Social media carried many more threats.

The gas pipeline, which carries gas from Burma’s offshore fields, opened in 2013, as Burma’s military was starting democratic reforms. The $1.5 billion 770-km (480 mile) oil pipe alongside, bringing crude mainly from the Middle East, started in 2017 under the government of elected leader Aung San Suu Kyi, who is now detained and facing an array of charges.

A PetroChina official who declined to be identified said there had been no problems with the operation of the oil pipeline—the only source of crude for the state energy giant’s refinery in Kunming, Yunnan province.

Protests over the pipeline flared after a Burma government document leaked from a Feb. 24 meeting showed Chinese officials had asked Burma’s junta to provide better security—and intelligence on ethnic minority armed groups on the pipeline route.

Reuters was unable to reach officials in Burma for comment on the document.

Billions of dollars had been earmarked for such projects, including an economic corridor ending at a $1.3 billion deepwater port, industrial zones, a new city next to the commercial hub of Yangon and a railway to the border.

She pointed in particular to the damage done to Beijing’s reputation over the Myitsone Dam project, which was shelved in 2011 amid a local outcry—prompting a concerted effort by the Chinese regime to cultivate the public as well as political leaders.

“Public opinion has been treated as a priority for China’s policy in Myanmar,” she said.

Efforts in recent years included everything from donating school backpacks to sponsoring inspection trips to China for officials—though a 2018 survey in Burma still found an “explicit bias” against Chinese investments.

The CCP had also tried to keep close to Suu Kyi, while maintaining ties to the army that overthrew her.

Balancing the relationship has become even more precarious.

While Western countries have condemned the coup, the Chinese regime has not even described it as one—in line with the generals’ wishes. Its call for restraint from both sides draws scorn from opponents of the coup who point to the killing of more than 60 protesters. One policeman has died, the army says.

“China shame on you. Stop supporting the theft of a nation,” read one protest placard outside the Chinese embassy before Burma security forces cordoned it off.

No matter how outlandish, allegations of Chinese involvement have swirled on social media.

Some said they had seen soldiers with Chinese features or heard some speaking Mandarin. Suspicions were raised by an increase in night-time flights to China—flights the state airline said carried seafood for the Lunar New Year holiday.

Unsubstantiated claims surfaced that the planes were bringing in soldiers or technicians to install an internet firewall—an idea dismissed by the junta and described as “nonsense” by the Chinese ambassador.

Concerns that anti-Beijing sentiment could turn on Chinese businesses has prompted some to reconsider their positions—especially as anti-coup protests and strikes strangle the economy.

“They can only vent on the Chinese people on the ground,” said one Chinese businessman who gave his name as Ran and is now seeking a way out—while saying he had not faced any personal attacks.

Burma also has a substantial minority with Chinese origins, whose older members remember anti-Chinese riots in 1967 in which an estimated 30 people were killed. Some younger members, however, have taken a conspicuous stand with the protesters.

“Our elders worry about the Sinophobic posts—things on Facebook like ‘the Chinese will be the first people to be beaten’ but it’s only a small number of people making them,” said Aung Aung, 23, a founder of the Young Burmese-Chinese Association.

“The people know where we stand. We want to get democracy back.”