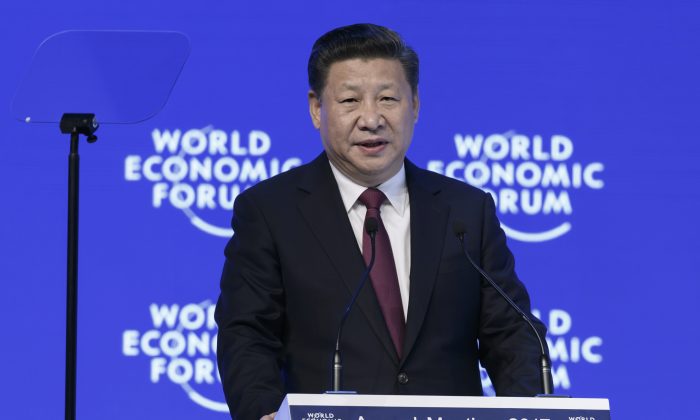 In seeking to consolidate power and erode the influence of a rival political faction, Chinese leader Xi Jinping has elected to go slow and steady over the past four years.

It was only after Xi spent two years purging officers loyal to Jiang that he appeared to formally signal his control over the military, by holding a grand parade in 2015 and later taking on the new title of commander in chief of a new joint battle command center. Recent investigations and abrupt “retirements” for officers suggest that the cleanup of the People’s Liberation Army is still underway.

But Xi has recently made a bold and risky play by bringing into custody prominent Chinese billionaire Xiao Jianhua—a move that puts Xi on very shaky ground but gives him significant leverage against the Jiang faction.

Chinese and Western media widely reported that Xiao, a Canadian citizen, went missing from his luxury apartment in the Four Seasons hotel in Hong Kong on Jan. 27. Most accounts indicated that Xiao had been brought across the border into mainland China by a handful of mysterious men.

Officially, Xiao is “abroad” seeking medical treatment, according to a deleted post from the social media account of his company, Tomorrow Group, and a front page ad printed in a prominent Hong Kong newspaper paid for by his company.

But Xiao, a key financier for the Chinese Communist Party’s elite, is currently in Beijing and assisting in corruption investigations, said a high-level source with authoritative information about discussions in the top Chinese leadership, who spoke with Epoch Times. Xiao’s case is now “top priority” in Zhongnanhai, the official work and living quarters of the Chinese leadership.

Xiao, the source said, is the Jiang faction’s most important money launderer and one of the most potent figures in the Chinese financial sector. Investigating Xiao is intended to implicate other members of the Jiang faction, including Zhang Dejiang, the top Hong Kong overseer and elite member of the Politburo Standing Committee; Zeng Qinghong, the former Chinese regime vice chairman and right-hand man of Jiang; and Party godfather Jiang himself.

The source also said the investigation of Xiao is the “prologue” to the Xi administration’s plan to purge Jiang’s remaining influence in Hong Kong’s financial sector, as well as the arts and cultural fields. The investigation is also aimed at countering the Jiang faction’s sway over the upcoming elections to choose the next Hong Kong chief executive.

Xiao’s case, however, is deeply unsettling for many parties.

Hongkongers and the international community are alarmed at the mob-style vanishing of a prominent figure in Hong Kong’s business community. They are also concerned about the Chinese regime’s apparent violation of Hong Kong’s semiautonomous status with what was very likely a Chinese security operation carried out on Hong Kong soil.

Chinese businessmen and officials in Hong Kong also fear being suddenly whisked away to Beijing. Epoch Times has learned from Chinese official circles that some officials are confused about what Xi is really up to in his investigation of Xiao.

Xi’s anti-corruption campaign has thus far appeared to be a genuine attempt at rooting out graft in the lower and middle official ranks, and a political purge in elite Chinese politics. But, given that financier Xiao has handled the business transactions of Communist Party elites and their families on both sides of the factional line, he could potentially implicate a huge swath of cadres and their cronies.

“The Xiao Jianhua case wasn’t just being hyped up by the media,” Xin Ziling, a retired Chinese defense official with channels to moderate voices in top leadership, told Epoch Times. “This is something that shakes up China and Zhongnanhai.”

For Xi, the cost of not investigating Xiao could have been much worse than the criticism currently being directed at his administration.

Xi currently faces resistance and pushback from the Jiang faction, particularly from the regime’s legal and security apparatus, which is still under Jiang’s control.

While dealing with domestic matters, Xi also has to contend with a hawkish Trump administration and invigorated neighboring countries.

Facing existential threats from within and without, Xi is probably seeking to deal with Jiang and his faction before the United States increases pressure on the Chinese regime to end its unfair trade practices and retreat from its militarized man-made islands in the South China Sea.

If Xiao releases enough incriminating evidence about CCP elites, or calls out other money launderers, Xi could conceivably move against Jiang’s three allies in the Politburo Standing Committee—Zhang Dejiang, Zhang Gaoli, and Liu Yunshan—before the 19th National Congress of the Chinese Communist Party, an important political conclave to be held in the latter half of 2017.

If the Jiang faction pushes even harder against Xi’s leadership, Jiang and his right-hand man Zeng could even be denounced before the 19th Congress. Already, Jiang and Zeng haven’t been attending or sending flower wreaths to the funerals of recently deceased prominent cadres—a sign that indicates waning influence in the coded language of the Chinese regime.