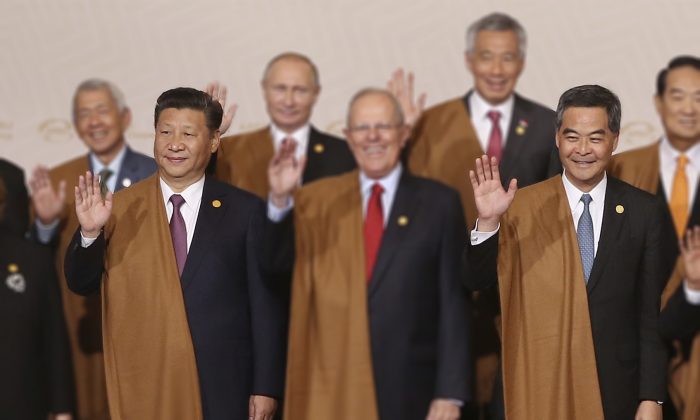 Analysis: Behind the Xi Jinping-Leung Chun-Ying Meeting at APEC

There is more than meets the eye to the encounter between Chinese leader Xi Jinping and Hong Kong chief executive Leung Chun-ying at a recent gathering of Asia-Pacific leaders.

Xi and Leung spoke for 45 minutes at the sidelines of the APEC meeting in Peru, and according to the state-run Xinhua, Xi “fully acknowledged” the work of the Hong Kong chief and his government.

Leung later indicated to the Hong Kong press that the praise was for his and his government’s handling of a recent controversy in the semiautonomous city’s legislature involving the banning of two pro-independence lawmakers for reciting their oaths of office in a rebellious fashion. Leung also said that the subject of his running for reelection next year wasn’t discussed.

The meeting is “noteworthy,” professor Lau Siu-kai, the vice chair of the semi-official Chinese Association of Hong Kong and Macau Studies, told Hong Kong English-language newspaper South China Morning Post, because “unlike similar occasions in the past, Xi didn’t give positive comments on Leung’s work before the cameras, and those remarks were only carried in the Xinhua report released subsequently.” (The Xinhua report was just under 300 characters and contained no direct quotations.)

The only matter discussed between the two leaders that was caught on camera was their respective flight times to Peru (Xi: 27 hours, Leung: 30 hours). And there’s no way of knowing how exactly the Xi-Leung conversation played out because the reporters were led out by security guards a little under two minutes into the meeting, according to various Hong Kong media outlets.

High-level information obtained by Epoch Times days before the APEC meeting suggests that the Xi really isn’t at all pleased with Leung’s performance.

The Xi Jinping leadership is “extremely dissatisfied” with Leung’s handling of the oath-taking incident, and didn’t request for the Chinese legislature to interfere in the incident by issuing an interpretation of Hong Kong’s mini-constitution, according to a source with close ties to Zhongnanhai, the Chinese leadership headquarters in Beijing.

The source said that the Xi leadership doesn’t wish to put focus on the two pro-independence legislators, but Leung had deliberately stirred up “anti-Hong Kong independence” sentiments, and even “surrounded his own Legislative Council with protesters.”

“There isn’t even a pretense of ‘One Country, Two Systems,'” said the source, referring to the arrangement where Hong Kong is allowed to retain its freedoms and capitalist way of life until 2047.

In August, a pro-Beijing Hong Kong newspaper started running commentaries on how Leung Chun-ying and high-ranking Chinese officials loyal to former Communist Party leader Jiang Zemin have been playing up the issue of “Hong Kong Independence” and instigating other troubles to create a tense situation in the city.

Epoch Times has long reported on the Jiang faction’s mischief in Hong Kong. Also, this newspaper has indicated in an earlier report that the Xi Jinping leadership won’t grant Leung another term in office.

How then to make sense of the somewhat positive report of the Xi-Leung meeting by Xinhua?

First, the communist regime will never air its dirty laundry in public. That being said, the brevity of the Xinhua report, and the unprecedented instance where Xi’s praise to the Hong Kong leader isn’t filmed, suggests that something unusual is going on.

Next, the Xinhua report could actually be oblique criticism.

The report calls upon the Leung government to “build broad social consensus and focus on boosting economic development and improving people’s well-being,” and “resolutely safeguard national unity and maintain social and political stability.”

Leung has done precisely the opposite of what is written by fueling and exaggerating the pro-independence movement. Also, Hong Kong’s GDP growth in the first quarter of 2016 was the lowest in four years, and the government is forecasting growth of 1.5 percent by year end 2016, down from the 2.4 percent in 2015.