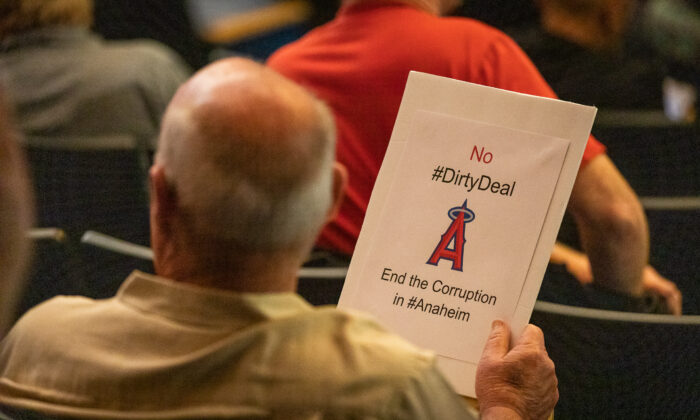 The Anaheim City Council selected a Laguna Niguel-based firm Aug. 9 to conduct an independent investigation into the city’s elected officials’ campaign contributions following corruption allegations made by the FBI in May.

Officials hope the audit—estimated by the city staff to cost between $1.5 million and $2.5 million (pdf)—will show whether any conflicts of interest existed between project or contract approvals and past campaign contributions to city councilors and former Mayor Harry Sidhu.

Councilors determined JL Group LLC was the only firm without past ties to the city.

“It seems to me that JL [Group] is the one that fits what we’re looking for the most,” Councilman Jose Diaz said.

Three other firms under consideration were the Brower Law Group, Hanson Bridgett, and King & Spalding.

“If we were to look at all of the four together, and to avoid any potential perception of conflict, the only one with no ties to Anaheim in any way is JL Group,” Mayor Pro Tem Trevor O’Neil said.

According to the company’s bidding proposal, it provides professional workplace consulting and investigative services to public and private entities. In the past, it has conducted similar investigations for the cities of Barstow, Montebello, Ventura, and La Mesa.

Other councilors supported choosing a firm that offered a lower cost.

“I’m fully supportive of an investigation taking place and one that will provide our residents with answers that are rightfully deserved in a timely and also fiscally responsible manner,” Councilman Avelino Valencia said. “My hope is that this investigation adds clarity to the unfortunate situation that we’ve undergone as a city as opposed to creating more skepticism and mistrust.”

Councilman Jose Moreno, who originally called for the investigation at the council’s June 9 meeting, abstained from voting on the matter after one firm disclosed that one of its employees had contributed to his campaign.

The proposal for an independent audit came after the FBI released May 17 an affidavit that revealed possible corruption involving Sidhu, then mayor, and the Angels baseball team owner Arte Moreno’s management company.

The FBI focused on an alleged possible deal made between the two during negotiations for the sale of the city-owned Anaheim Stadium. The city council has since voided the stadium deal, and Sidhu resigned May 24 and has not been charged with a crime.

During this week’s meeting, the council also selected a neutral person to work with the investigative firm and serve as the administrator. The city received six proposals from area judges with hourly rates ranging from $590 to $900.

Councilors selected retired Judge Clay Smith, a 20-year veteran of the Orange County Superior Court because his rate was the lowest.

At the meeting, the council also decided to delay responding to an Orange County Grand Jury report (pdf) issued in June. The report said the city’s handling of the $320 million Angel Stadium deal was rushed, lacked transparency, and betrayed constituents.

The city council has 90 days to respond to the recommendations and will consider amending the response letter at its next meeting Aug. 23.

In the report, the grand jury recommended that a future sale of the stadium property could “benefit the city” if it incorporates affordable housing for minimum-wage earners.

The jury also recommended the city implement a minimum 30-day period for the public and city leaders to discuss sales or leases of public land in the future.