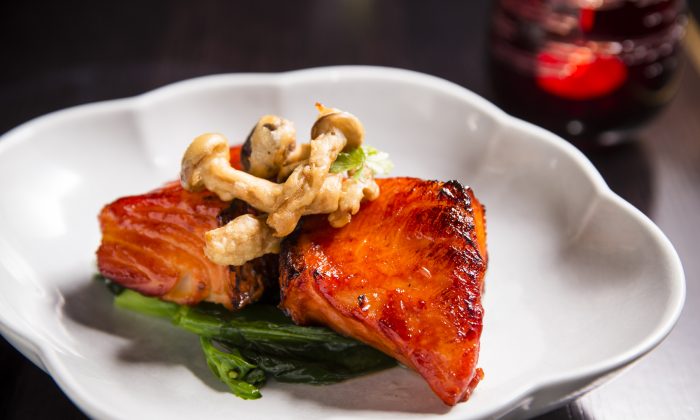 An Upscale, Modern Take on Cantonese at Hakkasan

It’s not hard to get an excellent Chinese meal when one looks beyond neighborhood take-out. There are at least three different Chinatowns in the city, and an authentic meal is never far away.

What’s more difficult is to have excellent Chinese meals in upscale surroundings. The association between a humdrum setting and Chinese food is so common, and that’s why eating at Hakkasan might be a surprise, or at lease cause for a feeling of initial cognitive dissonance.

Hakkasan, located steps away from Times Square, offers modern Cantonese cuisine. It has 12 locations around the world, the original of which opened in London in 2001 by U.K. restaurateur Alan Yau.

A traveler who goes from New York to Dubai to Miami, and most recently Shanghai (as of March) is likely to find a similar experience, from the setting to the food.

At 11,000 square feet, with seating for 200, there is plenty of elbowroom. An 80-foot entryway is the first sign of the spaciousness that awaits. Despite the space, it doesn’t feel cavernous the way similar large restaurants might. With the judicious use of screens and lattices, there are numerous intimate nooks and crannies that make for intimate seating.

Hakkasan has many intimate spaces, separated by screens. (Courtesy of Hakkasan)

In keeping with the upscale setting, Hakkasan has prices to match.

Growing up in the small city of Taiping, Malaysia, he has been cooking for 28 years. The dishes his mother cooked him while he was growing up, like braised pork ribs with yellow beans sauce, ultimately inspired him to become a chef.

The menu showcases luxurious ingredients. There is a Peking Duck version with caviar, for example.

Traditionally Chinese cuisine places a stronger emphasis on the inner substance—flavors and the principles of food as medicine—over external appearance.

But at Hakkasan, there is a great deal of thought given to presentation. The Crispy Duck Salad ($26) is not only a delicious juxtaposition of textures, between the crisp skin, the tender duck meat, pomelo, pine nuts, and shallots, but also all the elements are shaped into a creation with more structure than one would expect to see in a Chinese dish. Of all the dishes I tried, I would consider this one a must-try.

Another good palate-teaser is the platter of steamed dumplings, which come in beautiful packages of orange, green, and white in a bamboo steamer, and leave you wanting more ($24). The har gau, or shrimp dumplings, have a skin so thin they are almost see-through.

There are some definite departures from a traditional menu. There is a stir-fry with black pepper rib eye beef with merlot ($38). I wondered: merlot? Wait—rib eye, for a stir-fry? It all works very well together, actually; the beef is tender, with a nice flavor, reminiscent of other dishes—perhaps French—where meat is braised in a wine sauce.

What works less well is the accompanying cone of rice vermicelli. Was it just decoration? Or meant to be eaten? Our server wasn’t quite sure either—it was often taken to be decoration and left uneaten. It does add to the composition of the dish, though for being a significant size, it would be better to have something edible.

A Grilled Chilean Sea Bass With Chinese Honey ($37) was excellent, the sweet glaze pairing to perfection with the buttery fish. It was so good we ate mostly around the accompanying fried shimeji mushrooms and gai lan (Chinese greens), leaving them for the end.

I had one dessert, and it was a marvel of beauty as well as balance of textures and flavors. Executive pastry chef Rory Macdonald created what looked like a terrarium. When I tried to get a spoonful of mango pudding, what I got was not only the pudding, but also thin slices of ripe mango, little crunchy cocoa balls, and some sorbet ($15).

The aesthetics don’t play second fiddle to flavors here. It was a perfect little dessert.

The cocktail program makes use of a wide variety of fresh ingredients, and is inspired by Asian and tropical flavors. Cocktails are classified under the categories of Character, Elegance, and Strength, and Grace. Under Elegance, for example, one finds Lychee Martini (Double Cross vodka, lychee liqueur, lime, lychee juice, and grapefruit bitters) ($15). There are also nonalcoholic drinks like a lemongrass and jasmine iced tea ($8).