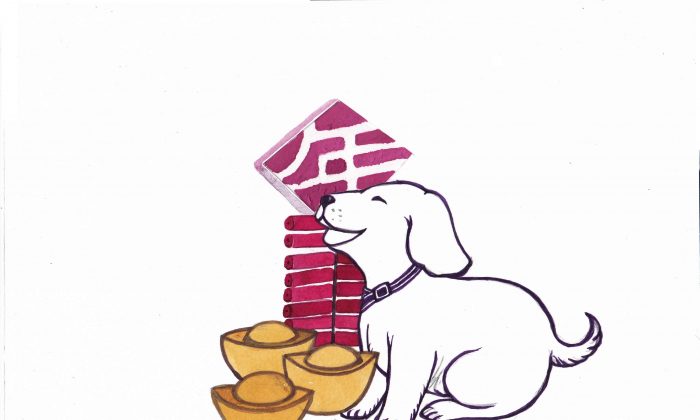 A joyful Year of the Dog is expected. (BH/The Epoch Times)
Chinese Culture

An Introduction to Chinese New Year 2018: The Year of the Dog

“Loyal, Smart, Sensitive and Brave” are the common words to describe the Year of Dog—the Chinese New Year 2018 —which begins on Friday, February 16, 2018. That’s the time for Rooster to get off work and the Dog to take the shift, coinciding with spring on earth.

A 12-year cycle of animals has been used in the Chinese zodiac for millennia. The dog is the 11th animal among the 12 Chinese zodiac signs: rat, ox, tiger, rabbit, dragon, snake, horse, sheep, monkey, rooster, dog, and pig.

The Chinese word for the barking of a dog is 汪汪 (wang wang). It sounds exactly the same as 旺旺 (wang wang), which carries the meaning of “prosperous” in Chinese. It is regarded as an auspicious symbol if a dog happens to come to a house. Therefore, many Chinese expect the year of the Dog to be a year of good fortune.

Dogs are used in the English language to describe human characters. “Lucky dog” is a lucky person; “top dog” a powerful person; “sea dog” an experienced sailor; “big dog” a bodyguard, etc. Other expressions, “to work like a dog,” means to work very hard; “to help a lame dog over a stile” means to give a timely help; “to put on the dog” mean to show off; “every dog has its days” means to wait for your chance.

Although there are not as many positive expressions associated with canines in Chinese literature, dogs have appeared in early painting with fine ladies since the Tang Dynasty (AD 618-907) to show a life of leisure. In the poem “Returning to my Farm” by Tao Yuanming (AD 365-427), one of the greatest poets of the during the Eastern Jin and Liu Song period, there are following lines:

With smoke from chimneys drifting in the air.

Amid the mulberry trees cocks crow with larks.

The poet gave us a vivid picture of a peaceful and lively rural life.

Dogs have performed many roles for people since premodern society, including companionship, hunting, herding, pulling loads, guarding, aiding the blind, and assisting police. For centuries, dogs have been good friends to man.

Dogs are also brave in defending those in need. Dogs are believed to be able to understand humans and obey their masters, with whom they often shared deep bonds. Dogs have been recognized as the most faithful, loyal and brave friends to humans.

One touching story is that of Hachiko, a dog that waited devotedly every day for his master to return for more than nine years in front of Tokyo Station after its master’s death. Hachiko was born on November 10, 1923 and died on March 8, 1934. Its master was Ueno who worked as a professor at University of Tokyo. They were very good friends. They would meet every day at Shibuya Station after Ueno’s work.

Its master, however, died from a cerebral hemorrhage at the university one day in 1925 and never returned. Not knowing its master had died, the dog waited every single day in the same location for its master to return. The dog’s loyalty to its master has touched the hearts of lot of people in Japan as well as in the world. In honor of Hachiko’s faithfulness, a bronze statue was erected in front of the Shibuya Station in April 1934.

A family dog named Angel saved an 11-year-old Canadian boy, Austin Forman, from a cougar attack. The boy was playing in the yard when a cougar suddenly appeared. The dog leaped in front of the cougar to ward off the much larger cougar. Austin was then able to get into the house. The family called 911 and got help. The brave dog was injured in its fight with the cougar, but it recovered soon after. The grateful family treasured it even more afterwards.

Greetings Phrases for the Year of the Dog

It is an important custom for Chinese people to send well-wishing cards or messages to relatives, friends, business partners, customers and suppliers during the New Year season. Chinese people are very happy to receive these well wishes and normally respond immediately with the same. It is very common, nowadays, to send New Year greetings via social media.

Below are some of the most popular New Year greetings for the Year of the Dog:

Prosperity Comes in the Year of the Dog, With Fortune at the Door (狗來旺 福滿門 gǒu lái wàng, fú mǎn mén)