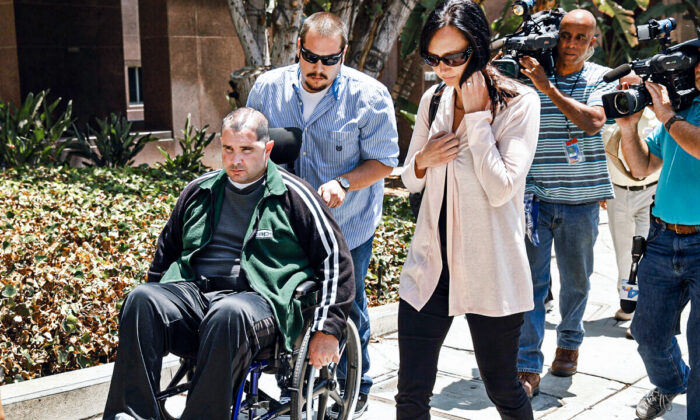 An Attack Outside Dodger Stadium Left Him With Brain Damage. He Has a Message for Super Bowl Fans

LOS ANGELES—Nearly three years ago, Rafael Reyna was leaving Dodger Stadium when he was attacked in the parking lot.

Reyna was in a coma for weeks and required months of rehab to relearn how to speak and walk again because he suffered brain damage. Even now, he cannot remember what happened on the evening of March 29, 2019, and his family feels little closure because his attacker has not been caught.

“I have to put my focus on my family and my husband. But let me tell you, deep down inside, I am just completely taken aback by how no one could find out who did this,” said his wife, Christel Valle-Reyna.

The Reynas say they haven’t heard from detectives in recent years. LAPD officials held a news conference a week after that attack appealing for the public’s help. Cmdr. Ruby Flores said officers were on the scene within 35 seconds but the attacker had already fled.

Christel said she was on the phone with her husband as he walked through the parking lot after the game against the Arizona Diamondbacks shortly after midnight when she heard an argument, and then what sounded “like a baseball hitting a bat.” A stranger picked up the phone to tell her her husband was crumpled and bloodied after being slammed to the ground.

LAPD investigators described the assailant as a man in his 20s, about 5-feet-8, 150 pounds with a clean-shaven face, wearing a gray sweatshirt, blue jeans and a blue Dodgers cap. He was accompanied by a woman in her 20s, about 5-feet-4 and 110 pounds with long black hair wearing a Dodgers jersey and short blue jean shorts. A white SUV originally thought to be connected was eventually ruled out after detectives talked to the owners.

“It is unsolved,” LAPD Capt. Jonathan Tippet said of the case. “There were no camera images or anything of the incident.” Tippet said investigators believe Rafael Reyna was intoxicated. “There is video security footage earlier of him “repeatedly doing things inappropriate toward women,” Tippet said.

Tippet said it looks like the case will remain unsolved unless someone comes forward with a new lead.

Although Reyna’s assailant hasn’t been arrested, within a week of an attack in the SoFi Stadium parking lot during the NFC Championship this year, a suspect was apprehended.

The victim, Daniel Luna, underwent a hemicraniectomy on the right side of his head to relieve internal pressure and remained in critical condition in intensive care at Harbor-UCLA Medical Center.

Reyna has no idea what happened the night he was attacked. “I don’t have any memory of going into the game, being at the game … talking to my wife at the end of the game,” said Reyna. “Will I ever remember? I ask her every day.”

Speaking slowly, he added: “What was the reason for us to get in this altercation? It is hard for me even to think what I could have said to him.” A lifelong Dodger fan, Rafael said he has no memory of his father taking him to Chavez Ravine since he was a young boy. He said he used to take his own kids, who are now 14 and 24, in their strollers to games.

Of Sunday’s Super Bowl at SoFi Stadium, Reyna urges fans to be respectful of each other and to avoid any violence. “I wish everyone to get along and enjoy the game together, whether we know them or not.”

There have been other instances of violence at Los Angeles sporting events. Most infamously, San Francisco Giants fan Bryan Stow was beaten by two men on opening day of the Dodgers’ 2011 season and was left with a devastating brain injury. Two suspects were eventually caught and convicted in the assault case.

Following the attack on Reyna, Stow told a reporter, “I can’t believe that it’s been eight years since it happened to me and that it’s happening again.”

In a separate case, Bakersfield geologist Ariel D. Auffant suffered a traumatic brain injury after he was beaten outside Dodger Stadium after attending a playoff game between the Mets and the Dodgers in October 2015. His assailant pleaded no contest in the assault case.

In 2019, Rams fan Peter Bergin sued the team and its contracted security after he alleged he was attacked by a drunk fan at a football game at the Los Angeles Memorial Coliseum. He alleged he suffered a broken nose and dislocated his knee when he fell during the attack.

Meanwhile, the Reynas are suing the Dodgers for negligence, premises liability, intentional infliction of emotional distress, and allege the franchise failed to provide adequate security and had poor lighting. The lawsuit echoed one filed by Giants fan Stow. One of Stow’s lawyers, David Lira, is also representing the Reynas.

Attorney Carl Douglas, who represents the Reynas, along with Lira, said the lawsuit is slated for trial June 30. “We think that protocols were employed after Mr. Stow was injured 11 years ago that either went by the wayside or something happened that night” to security.

“The Dodgers owe the fans more and yes, Guggenheim Partners is one of the richest owners in Major League Baseball, and they owe their fans more and we are going to hold the Dodgers liable,” Douglas said.

An attorney for the team and a security manager had asserted that Reyna “appeared to be intoxicated” when shortly before midnight security personnel roused him out of the stadium.

In a court filing, attorney Jerome Jackson alleges, “Mr. Reyna came up behind an unknown woman in the parking lot. He made several comments to her” and “grabbed and/or slapped her on her buttocks,” which led to a confrontation with the woman’s male companion. Afterward, the couple fled the scene.

Meanwhile, Christel Valle-Reyna said the stadium should have provided better security and that her family now avoids such big events.

“For us, I have no plans to take my children to any sporting event anytime soon because I keep seeing the same problems happen over and over again,” she said. “When you have all these millions of people attending these events, how do these facilities not have better security?”

She said when she learned about the recent incident at SoFi Stadium, it set off flashbacks of the family’s own struggle with her husband’s injuries. Rafael spent months in a rehabilitation hospital in Downey.

“Our lives had to go in a different direction. … We brought him home and I became his caregiver,” she said. “We are still living this nightmare that happened in a split second and our lives are turned upside down.”