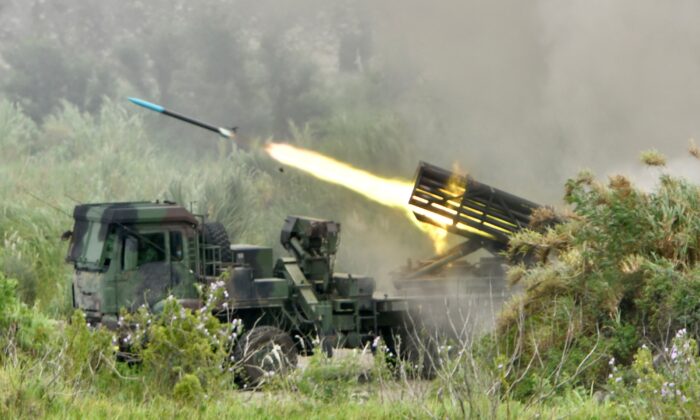 A projectile is launched from a Taiwanese-made Thunderbolt-2000 multiple rocket system during the annual Han Kuang military drills in Taichung, Taiwan, on July 16, 2020. (Sam Yeh/AFP via Getty Images)
Thinking About China

An Asymmetric Strategy for Defending Taiwan

If Russia invades Ukraine, could it embolden the Chinese regime to also attack Taiwan? Moscow is clearly looking to Beijing for moral support, as Russian President Vladimir Putin’s recent trip to China would indicate.

As The New York Times puts it, Putin sees Chinese leader Xi Jinping as offering a “lifeline” to Russia, if not a formal alliance. At the very least, Beijing could help block the United Nations Security Council from taking any action in support of Ukraine.

Nothing is more speculative than a Chinese invasion of Taiwan, but a Russian victory over Ukraine could encourage Beijing to tighten the screws on Taipei. For Taiwan, deterrence is a job that never ends.

For these reasons, a recent paper by Drew Thompson, a visiting fellow at the National University of Singapore’s Lee Kuan Yew School of Public Policy, makes for particularly relevant, and compelling, reading. His monograph, “Winning the Fight Taiwan Cannot Afford to Lose,” was published late last year by the U.S. National Defense University (it can be accessed here). In a nutshell, Thompson argues that deterring an invasion is “the ultimate objective” for Taiwan (and the United States) and that this, in turn, demands that Taiwan “transform its military to adapt to growing power-projection capabilities.”

The answer, Thompson believes, lies in a new asymmetric strategy called the Overall Defense Concept (ODC). The ODC was originally proposed a few years ago by Taiwan’s then-Chief of General Staff Admiral Lee Hsi-min. The ODC explicitly rejects Taiwan’s traditional defense strategy of attrition warfare, which is based on the “American approach to warfare,” particularly the ability “to project power over great distances and to maximize mobility and networks to take the fight to the enemy with overwhelming superiority.”

Taiwan, Thompson argues, “needs the opposite: short-range and defensive systems that can survive and initial bombardment from a larger adversary and that are suitable for deployment close to home in defense of the island should it come under blockade or attack.” “Overwhelming superiority” against China is impossible, so “innovative and symmetric strategies” are necessary.

Instead, the ODC would target Chinese forces where they would be at their weakest: Taiwan’s littoral, or the waters closest to Taiwan (within 62 miles of its coastline). The ODC is divided into three phases.

The first phase—force preservation—is to protect Taiwan’s military and critical civilian infrastructure from attack, mainly from Chinese missiles. Taiwan has already put considerable resources into building up its air defenses with anti-air and anti-ballistic missiles, hardening shelters and underground hangers for its fighter jets, and improving its capabilities for rapid runway repair and camouflage.

The second phase is what Thompson calls the “decisive battle in the littoral.” This means engaging and destroying, as much as possible, People’s Liberation Army (PLA) forces in the Taiwan Strait. The main weapons would be anti-ship cruise missiles—both on large warships (such as Taiwan’s Lafayette-class and Perry-class frigates) but especially on Taiwan’s new and stealthy, high-speed Tuojiang-class corvettes—and sea mines, laid by new fast mine-laying boats. Swarming and “shoot-and-scoot” tactics would be instrumental during this phase.

The final phase entails destroying any PLA forces that make it to Taiwan’s shores. The ODC envisions a “kill-zone” extending approximately 25 miles out from likely invasion beaches. This zone would be heavily mined and supported by land-based mobile anti-ship systems (including U.S.-made Harpoon missiles recently released for sale to Taiwan) and saturation artillery attacks (such as the U.S.-made HIMARS multiple-rocket system). The Taiwan Air Force would operate mainly over this zone and “seek to deny Chinese fighters, bombers, and drones the ability to operate effectively within Taiwan’s battlespace.”

Aiding Taiwan’s beach defenses is the topography of the island itself. Taiwan’s shoreline is “a defender’s dream come true.” It features a “complex infrastructure” of cliffs and sea walls, paddy fields, bridges, tunnels, overpasses, mountainous zones, and “urban jungles.” Its hills are “honeycombed with tunnels and bunker systems,” and there are numerous places where mobile missile launchers can hide. Finally, Taiwan’s outer islands are bristling with missiles, rockets, and artillery.

Missiles, mines, and passive defenses comprise the core of the ODC. Of less utility, according to Thompson, are large and expensive traditional weapons systems, such as fighter jets, large warships, and submarines. Thompson also notes the vulnerability of Taiwan’s runways to repeated enemy attacks.

This smashing of too many rice bowls—particularly long-favored “legacy weapons”—has made it difficult to get the Taiwanese military to sign on to the ODC. But, according to Thompson, more military officers—particularly mid-level staff officers—are beginning to appreciate the value of asymmetric operations based on speed, mobility, indirect fires, and swarming with large numbers of less-expensive weapons.

Thompson notes in his monograph three other hurdles to implementing the ODC. The first two are domestic: the lack of personnel and gaps in the Taiwanese military’s logistics supply chain. In the first place, the end of conscription and the reduction of military service to only four months has created a huge shortfall in manning the Taiwanese armed forces. In addition, the Taiwanese military lacks sufficient numbers of stockpiled weapons or a dynamic system for distributing them in a hostile environment close to home.

Finally, Thompson asserts, the United States constitutes a problem: it may support the asymmetric operational concepts embedded in the ODC, but it also likes selling Taiwan large, expensive but perhaps more and more marginally useful weapons like fighter jets. The solution, therefore, would be for the United States to supply critically enabling systems and technologies, such as long-range missiles, air-launched sea mines, vertical-launch F-35Bs (partially solving the problem of vulnerable runways), and cyberweapons.

It is important that Taipei begin to look at more innovative, asymmetrical ways to deter China. The ODC doesn’t solve all of Taiwan’s defense challenges, but it does offer some intriguing new ideas. It is worth further study.