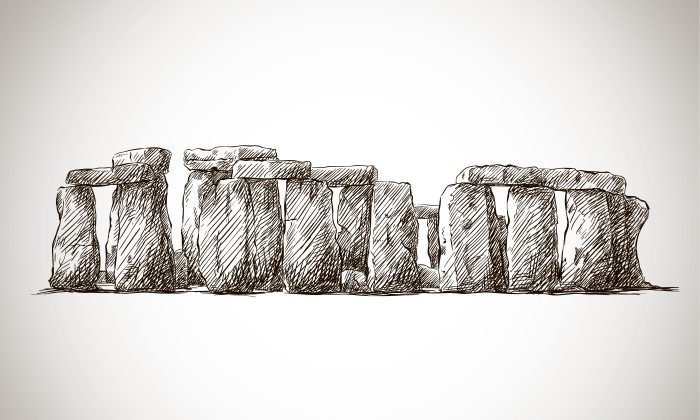 An illustration of Stonehenge. (Kameshkova)
Beyond Science

English landscape architect Sarah Ewbank says the prehistoric Stonehenge megaliths may once have served as supports for a wooden, two-storey roundhouse—a venue for feasting, speakers, and musicians.

Ewbank designed a small model of what she has in mind and is looking for money to build a 1:10 scale model of the structure. She says the fact she is not an archaeologist has freed her from preconceived notions and allowed her to approach the matter in a fresh way.

Ewbank told Ancient Origins via email about her vision of Stonehenge: “I believe Stonehenge was a Bronze-age venue, a large oval hall encircled and overlooked by galleries. Interestingly, the upper level was tiered, the height of different sections reflecting the different height trilithons.”

Trilithons are structures, characteristic of Stonehenge, consisting of two vertical stones with a third stone set horizontally on top.

“Consider both hall and galleries filled, listening to a speaker, or maybe there was feasting on the galleries with dancing below, perhaps crowds gathered to listen to singing or musicians playing, or maybe ceremonies took place to welcome in the solstices,” Ewbank continued.

She said she’s discussed her theories with other experts. Some of them agree her interpretation could be correct, but others strongly disagree and argue for the traditional view.

The sides of the building may have been made of oak and the roof of thatching, Ewbank speculates based on common ancient building materials. Of course, it is highly unlikely wood or straw would survive the thousands of years Stonehenge has existed, so finding physical evidence for her theory—other than the layout of the stones themselves—is next to impossible.

On her website, people have asked her if there is evidence of a roof. She points out that 500-year-old abbeys have roofs missing. “So don’t expect to find the timber structure lying around after 4,000 years,” she said.

“When you look at it the whole thing it fits absolutely perfectly,” she’s quoted as saying in Salisbury Journal. “I haven’t had to push one stone out of place. I have just taken all the standing stones and it all fits.”

I haven’t had to push one stone out of place. I have just taken all the standing stones and it all fits.
— Sarah Ewbank

She lists some reasons for theorizing Stonehenge was a roundhouse, including:

4,000-Year-Old Body of Teenager Near Stonehenge May Give Clues About Bronze-Age Life

In an interview with Salisbury Journal, she mentioned that having a roof on the structure would have made it useful all year, rain or shine: “Why would you move 75 large stones just so you could dance around twice a year? If you put a roof on it you can use it all year.”