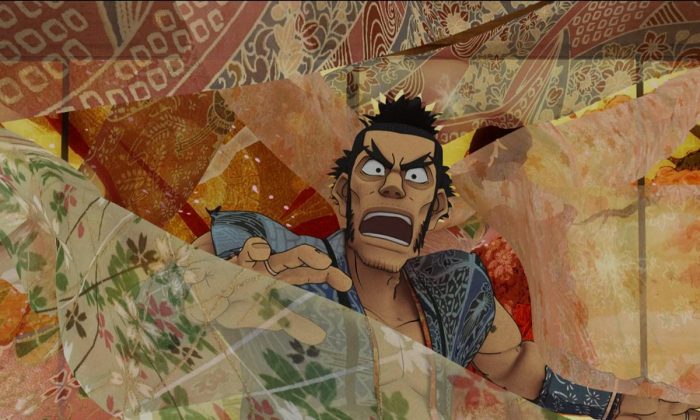 A scene from “Possessions,” one short film of four in the anthology “Short Peace.” (Eleven Arts)
Entertainment

An Anime Anthology From the Creator of ‘Akira’

They are four very personal potential apocalypses. Three occur during Japan’s past, and one is set in its future. The ultimate results will vary drastically according to the characters and circumstances involved. The anime anthology “Short Peace” was produced under the auspices of Katsuhiro Otomo, the creator of “Akira.”

After a brief but strange opening prelude, “Peace” commences with Shuhei Morita’s Oscar-nominated “Possessions,” which truly deserved to carry home the little statuette. Its loss can only be ascribed to a lack of taste on the Academy’s part, because it is a visually striking work with unexpected depth.

A lush supernatural fable in the tradition of “Kwaidan,” “Possessions” takes place during a dark and stormy night in 18th century Japan. A weary traveler seeks shelter in a shrine, only to find himself in a supernatural repository for broken objects that hold a “grudge.”

Fortunately, the man is both handy and spiritually sensitive. Morita’s richly detailed animation is strikingly elegant, yet it has an appropriate macabre undertone. “Possessions” evokes scores of classic Japanese movies, yet there is something strangely moving about it.

Otomo’s own “Combustible” packs quite an emotional punch, as well. Set during the Edo era (or thereabouts), it follows the ill-fated son and daughter of upper-class neighbors, who are obviously meant for each other but are irreparably separated when he rejects his birthright to join the fire brigade.

Unfortunately, his services will soon be required. Inspired by the look and composition of Japanese watercolors and screen art, “Combustible” is stylistically stunning. Nothing like conventional anime, it borders on the outright experimental, yet it is driven by a narrative worthy of classical tragedy.

Arguably, Hiroaki Ando’s “Gambo” could be considered a kaiju film, yet it is perfectly in keeping with the tone of Otomo’s contribution. A demon has terrorized a forest village, carrying off the young girls until only one remains. Venturing into the woods to meet her fate, she encounters Gambo, a gigantic white bear, who is the earthly servant of the gods. When the two supernatural creatures clash, things get intense and unusually bloody.

The action continues with Hajime Katoki’s “A Farewell to Arms,” a post-apocalyptic techno-thriller following an armored military unit’s campaign to take out an automated battle tank. A veteran designer on “Mobile Suit Gundam,” Katoki puts the pedal to metal, delivering a barrage of explosions amid a deadly cat-and-mouse game.

Arguably, the constituent films of “Short Peace” proceed from best to worst, but the decline is remarkably gradual. Frankly, there is no clunker in the lot.

While the overall running time is only 68 minutes, we can hardly accuse it of false advertising, since it announces its shortness in its title. Regardless, the four chapters will convince any viewer that anime can be a form of high art.

Absolutely necessary viewing for any and every animation fan, “Short Peace” screens in New York at the Village East on Monday, April 21. Check Eleven Arts’ website for other screenings nationwide. www.elevenarts.net