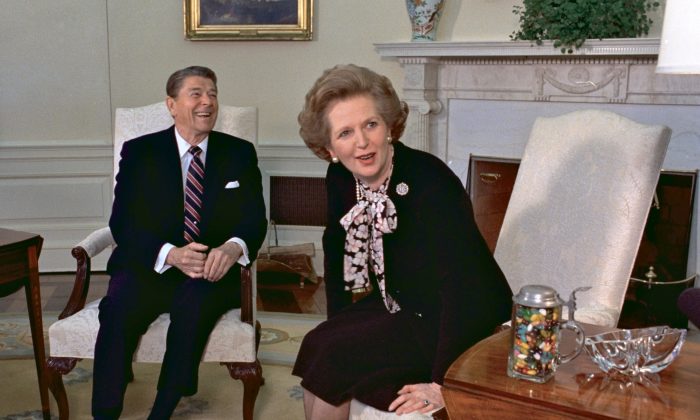 In a file photo from Feb. 20, 1985, former British Prime Minister Margaret Thatcher sits with her friend and political ally President Ronald Reagan during a visit to the White House in Washington. (J. Scott Applewhite/AP Photo)
Viewpoints

I wrote this four-part series on creating an American majority, not a Republican majority for a reason. I am convinced the radicalism of the Big Government Socialist, woke politicians and their performance failures create a unique opportunity to propose a dramatically different future for our country. This future is based on different principles and focused on unifying all the American people who reject leftism and are fed up with failure.

There is a chance to create an America that works. We can replace the Big Government Socialist woke world that fails.

Moving forward to a new renaissance of a successful, working America requires winning the simple performance argument—and the more complex policy-values arguments. The importance of winning both arguments is captured in Claire Berlinski’s invaluable book, “There Is No Alternative: Why Margaret Thatcher Matters.”

Berlinski describes how Prime Minister Thatcher set out, from her first days as opposition leader, to destroy the moral legitimacy and performance promise of socialism. She did such an effective job of discrediting socialism as a moral force that no openly leftwing leader has been elected Prime Minister of Great Britain for 40 years.

It was during this period of intellectual and moral hammer blows against the Left that Thatcher said “first you win the argument, then you win the vote.”

Thatcher is as important a leader as President Ronald Reagan for those who want to understand how to win cultural arguments and move America from Big Government Socialism to a more rational, work-oriented, success-based policy of creating a better future through free enterprise and entrepreneurship.

Before Thatcher, the Conservative Party in Britain had been dominated by elitists who were used to accepting the core attitudes of socialism. They were comfortable operating within a framework slightly right of the Labour Party—but nothing too bold. Thatcher had come from a solid middle-class background and grew up with Winston Churchill as her hero. She saw herself fighting to save Britain from the moral and economic decay of socialism fully as much as Churchill had fought to save Britain from the mortal threat of Adolf Hitler.

Thatcher had the toughness and firmness of a wartime leader. For a woman to express these characteristics in 1975 Britain was astounding. Even through a modern lens, her determination is astounding regardless of her sex.

She once pulled F.A. Hayek’s “The Constitution of Liberty,” a nearly 800-page classic work on freedom, out of her purse and slammed it on the podium at a party meeting and declared, “this is our platform. This is what we are fighting for.” And she won.

Like Thatcher, we have an opportunity in 2022, 2024, and 2026 to win both the performance and policy-values arguments.

If the American people conclude that the Joe Biden-Kamala Harris-Chuck Schumer-Nancy Pelosi team has only failed on performance, they might be comfortable replacing them in a few years with other similar Big Government Socialist leaders.

However, if, in the Thatcher tradition, the American people conclude that the woke policies, beliefs, and values are the ultimate cause of the Biden-Harris-Schumer-Pelosi team’s failure, then they will be reluctant to return them to power for decades—and possibly even generations. Look at how long Republicans remained a minority in the Rooseveltian revolution after 1932. Republicans really only began to achieve parity under Reagan (himself a former FDR Democrat) after nearly 50 years.

It is impossible to win victories on this scale if we are solely focused on trying to create a Republican majority. There are millions of Americans who are deeply (and increasingly) unhappy with the current system. But they are not ready to become Republicans. The Reagan Democrats became a halfway step for conservative Democrats, who gradually transitioned into being Republicans. Similarly, there must now be an American focus to make it as easy as possible for people to be allied without having to repudiate their own identities.

Consider some of the massive American majorities that are already out there. They can potentially become a movement that focuses on a better life for all Americans. There is a great amount of this data available to everyone at AmericanMajorityProject.com, but here are a few examples.

Most Americans agree on our historic core principles.

Most Americans agree about limiting government.

Most Americans agree on education issues.

Most Americans agree about gender issues.

Most Americans agree about border security and immigration.

A majority of Americans agree about the importance of work and independence.

Most Americans agree about discrimination.

Finally, Americans are clear about the importance of honest elections:

In every one of these examples the majority is much larger than the Republican Party—and usually includes a majority of Independents and a significant minority of Democrats. They are truly American issues.

The consistent scale of these majorities should be a road map for those who want to build a long-term, stable American majority rather than a smaller, and shorter lived, Republican majority.