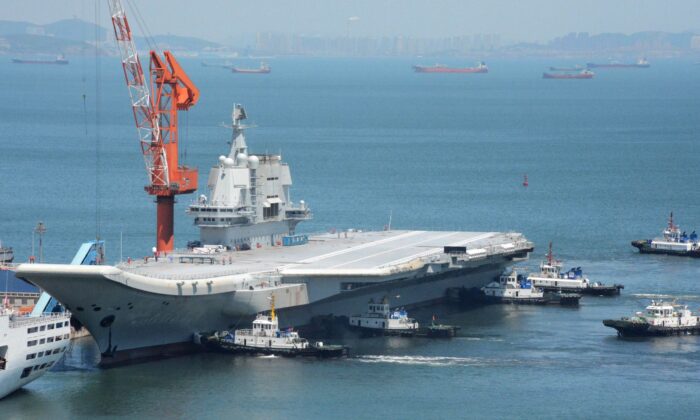 An ‘Aircraft Carrier Arms Race’ in the Indo-Pacific?

China is reportedly less than six months away from launching its third aircraft carrier. This is also the second carrier that it has constructed domestically (its first is an ex-Soviet vessel purchased by Beijing in the late 1990s).

This vessel, designated the Type-003, will be the People’s Liberation Army Navy’s (PLAN) first “supercarrier”: displacing up to 100,000 tons and outfitted with an electromagnetic catapult and integrated electric propulsion. It will be one of the largest and most advanced aircraft carriers built outside the United States.

Twenty or 30 years ago, aircraft carriers were dismissed “cruise missile magnets”—modern-day cannon fodder in the new 21st century battlespace. And yet more and more countries in Asia are discovering the potential value of aircraft carriers. For a long time, China and India were the only countries in the region operating large fixed-wing carriers, but they have been—or may soon be—joined by new players.

This begs the question: are we seeing the emergence of an aircraft-carrier arms race in the Indo-Pacific?

For decades the only country in the Indo-Pacific region to possess an aircraft carrier was India, which operated two ex-British carriers, both dating back to the 1950s. Their military usefulness was highly debatable, however, as they were quite small and operated only a handful of aging Harrier jump-jets.

Thailand also possesses a “pocket” carrier, the 12,000-ton Chakri Nareubet; although configured to use Harrier jets, the vessel currently flies only helicopters.

All this began to change around the turn of the 21st century. After spending years in drydock, the PLAN launched its first aircraft carrier—the heavily refurbished and modernized ex-Soviet Varyag—in 2011. Although small compared to U.S. supercarriers, this vessel, rechristened the Type-001 Liaoning, was a good learning platform for both the PLAN and the Chinese shipbuilding industry.

Around the same time, India began work upgrading its carrier fleet. In 2004, it acquired an ex-Russian carrier, the Admiral Gorshkov, and rebuilt and refitted it; it was subsequently relaunched as the INS Vikramaditya.

Both China and India have continued to expand their fleets of aircraft carriers. In 2017, China launched its first completely indigenous aircraft carrier, the Type-002 Shandong. Displacing 70,000 tons fully loaded, and capable of carrying up to 48 aircraft, the Type-002 is a marked improvement over the Liaoning. As already noted, the Type-003 should be launched as early as this year, and could be commissioned by the end of 2023.

In addition, China is already planning its first nuclear-powered supercarrier, the Type-004. It is speculated that the Type-004 could operate up to 100 fixed-wing and rotary aircraft. This ship could enter service by the end of the decade and will likely also serve as a model for additional Chinese nuclear-powered carriers.

It is also possible that China could have four nuclear-powered supercarriers by 2035, the year the PLA plans to achieve the objective of “complete military modernization.”

For its part, India has complemented the Vikramaditya with a new, indigenously built carrier, the INS Vikrant. The Vikrant is currently undergoing sea trials and will likely be commissioned sometime this year. The Indian Navy is also planning to acquire a third carrier, also to be built domestically, to be launched sometime in the next decade.

The Sino-Indian rivalry for great power supremacy in the Indo-Pacific has driven much of this aircraft-carrier production. Nevertheless, the drive to build and operate fixed-wing aircraft carriers has lately proliferated throughout the region.

In 2018, the Japan Maritime Self-Defense Force (MSDF) announced that it would convert its two 27,000-ton Izumo-class “helicopter destroyers” into ships capable of operating fixed-wing aircraft. This would give the Japanese their first aircraft carriers since World War II.

At the same time, Japan is buying 42 F-35B aircraft, the short-takeoff and vertical-landing (STOVL) variant of the F-35 Joint Strike Fighter; 12 to 24 of these fighters will be deployed on these ships. The MSDF has already started testing takeoffs and landings of F-35Bs from the deck of the Izumo, using aircraft supplied by the U.S. Marine Corps.

In addition, South Korea recently announced that it will build a 45,000-ton dedicated aircraft carrier, designated the CVX. Like Japan’s Izumo, it will be a true flattop operating STOVL aircraft like the F-35B. Seoul has bought at least 20 F-35B fighters, but this number could rise if South Korea constructs additional CVXs (which has been mooted).

Finally, Singapore is currently building an 14,500-ton open-deck “Joint Multi-Mission Ship” (JMMS), which could conceivably deploy a handful of F-35Bs (the country has committed to buying at least four F-35Bs). Australia’s two Canberra-class amphibious assault ship could also operate F-35Bs, should it choose to do so.

To be sure, current, locally operated carriers have their limits. They carry much fewer combat aircraft than the U.S. Navy’s Nimitz-class carrier, a 100,000-ton, nuclear-powered behemoth that can deploy at least 90 planes. In comparison, the Shandong can carry only 32 fighter jets and the Vikramaditya about the same. In addition, current Indian and Chinese carriers suffer from the use of the “ski-jump” design, which greatly limits the number of aircraft that can be operated at any one time.

Despite these limitations, however, more aircraft carriers are coming to the Indo-Pacific, and they are expanding in terms of numbers, capabilities, and operators. In particular, Chinese and Indian carriers are getting bigger and, therefore, capable of carrying more aircraft.

Moreover, aircraft carriers do not have to be large in order to have a significant impact. Japanese and Korean carriers may be smaller, but they can also be quite potent, given that the F-35B is a superior fighter jet compared to Chinese or Russian carrier-based aircraft.

The value of aircraft carriers still greatly outweighs their vulnerability. They have considerable impact in peacetime operations, providing large, secure platforms from which to launch humanitarian and disaster relief activities.

In military contests, carrier battlegroups are instrumental to providing air support to naval and land forces, as well as providing useful naval footprints for anti-submarine operations and intelligence-gathering.

Consequently, aircraft carriers are experiencing not just a rebirth, but a serious proliferation. Carriers will soon again dominate the navies of the Indo-Pacific.

Most important, in military operations, aircraft carriers are still invaluable; without Harrier jets flying off those carriers, British casualties would have been much worse.

To be sure, so far most current or future Indo-Pacific aircraft carriers have considerable limitations. Most are small and can only carry relatively few numbers of fixed-wing fighters, especially compared to U.S. supercarriers (the Chinese Type 001A operates at most 32 J-15 fighters, about half what a U.S. carrier can carry).

Moreover, the ski-jump design severely limits the number of aircraft that can operate at any one time, while also reducing the usefulness of the aircraft itself: the plane has to hold so much fuel that it is almost literally a flying gas tank, unable to carry more than a handful of armaments.

These are technological limitations, however, and ones that will likely be tackled by later carrier designs. Despite their vulnerabilities, therefore, the aircraft carrier’s value endures.