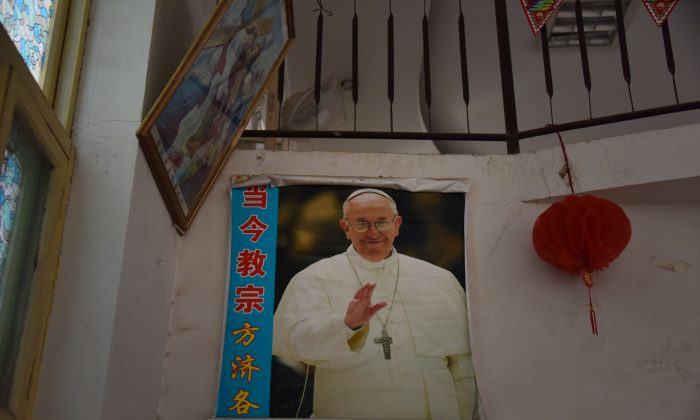 A poster of the Pope is seen in a closed church in Xincun, in China's central Henan Province on Aug. 12, 2018. (Greg Baker/AFP/Getty Images)
Viewpoints

An Agreement Between the Holy See and Communist China?

Communists came to power in China in 1949. As happens everywhere that communism spreads, the government soon began jailing religious leaders, driving out missionaries, and dismantling or destroying churches.

The regime expelled papal representatives and broke diplomatic relations with the Holy See in 1951. Since then, the estimated 12 million Chinese Catholics have had two options: join the state-controlled Chinese Patriotic Catholic Association or attend a “house church” as part of the underground Catholic Church that remains loyal to Rome.

One huge issue at the heart of the division between China and the Catholic Church relates to the appointment of bishops. Canon 377.5 in the Code of Canon Law states that “no rights or privileges of election, appointment, presentation, or designation of bishops are conceded to civil authorities.” Chinese authorities, however, insist on that right.

By the most recent count, there are about 100 bishops in China. Of those, about 65 belong to the Chinese Patriotic Catholic Association and around 35 belong to the “underground” church. Some government-appointed bishops have been excommunicated by Rome. Now, however, an agreement may be at hand.

Media reports say that a high-level delegation from the Holy See will soon travel to China for the signing of an agreement on the nomination of bishops. This news has caused a good deal of consternation in the Catholic world, particularly among those who know of the recent abuses of the church by the Chinese government.

In 2014, Chinese officials instructed crews to demolish or hide statues depicting Biblical scenes at a site of Catholic pilgrimage in the city of Wenzhou. Hundreds of Protestant churches were also damaged or destroyed as part of this campaign. The behavior was likened to the smashing of church property during the Cultural Revolution.

In 2015, 94-year-old Bishop Cosmas Shi Enxiang died in prison after having spent 54 years working in forced labor camps because of his faith. He had been ordained as a priest two years before the communists came to power. He was first arrested in 1954 and spent much of the following three decades at hard labor. He was eventually released and ordained as a bishop in China’s underground Catholic Church. Unfortunately, he was imprisoned again between 1989 and 1993 and a final time from 2001 (when he was last seen) until his death. There was no trial or charges; his crime was spreading his faith.

At the time, Bishop Enxiang’s death left James Su Zhimin as the only Chinese Catholic bishop still being held in secret detention. He has been in custody since October 1997, when he refused to join the state-sanctioned church. He has not been heard from in several years, but according to a 2015 report from his family, the Chinese government has offered him as a bargaining chip in negotiations with the Vatican.

Even as the negotiations for the planned upcoming agreement have been taking place, the Chinese government further tightened its grip on religion.

In recent weeks, Chinese President Xi Jinping launched a program to “Sinicize” all religions to make sure that they are in accord with the Communist Party viewpoint. As part of that policy, authorities shut down the largest Protestant house-church in Beijing.

Additionally, a draft regulation proposed banning all foreigners from using the internet to promote religion, prohibiting live-streaming and online broadcasts, and requiring licenses from governmental offices for all sanctioned church groups.

New rules put in place earlier this year increased penalties for unofficial congregations and for unregistered religious activities by Buddhists and Muslims.

While the exact terms of the proposed agreement between Rome and Beijing remain confidential, sources report that candidates for the bishopric will be chosen at the diocesan level through a “democratic election” system that the Chinese authorities introduced in 1957.

Under this process, priests, nuns, and laypeople will vote from a slate of candidates presented by the government. The results of these elections then will be sent to authorities in Beijing, who will examine them and then submit a name to the Holy See. The pope will make the final decision whether to approve. Details of what happens following a papal veto are unclear.

The proposed agreement includes recognition by the Holy See of seven “illegitimate” Chinese bishops who were ordained without the pope’s approval over the past decade or so, three of whom have been excommunicated by Rome. They will be named as bishops of their respective dioceses.

This concession by the pope on excommunicated bishops would require bishops who have rejected government control in their dioceses to step aside in favor of government-appointed bishops. They would then have to join the Patriotic Association to gain official recognition. One bishop has already balked at the idea of turning his diocese over to an excommunicated, government-approved bishop, and many priests have expressed unwillingness to join in the communist-sanctioned church.

“I would make a cartoon showing the pope kneeling and offering the keys of the kingdom of heaven and saying, ‘Now, please recognize me as pope.’ The advisers of the pope are giving him advice to renounce his authority,” said Cardinal Joseph Zen, a former bishop of Hong Kong, according to the Wall Street Journal.

Sources in Rome say that Pope Francis is convinced that more is to be gained through dialogue, encounter, and friendship. Here’s hoping he is correct. There certainly are numerous differences that need to be resolved. The parties don’t currently agree on the status of the Chinese bishops’ conference (not recognized by Rome), the ability of Chinese bishops and Holy See officials to travel back and forth, and even the size, number, and location of Catholic dioceses in China.

For its part, China has always viewed religion through a political lens. It undoubtedly sees the benefit it would gain from an agreement with the Holy See. They are significant, and they include the chance to hijack the Catholic Church in that nation.