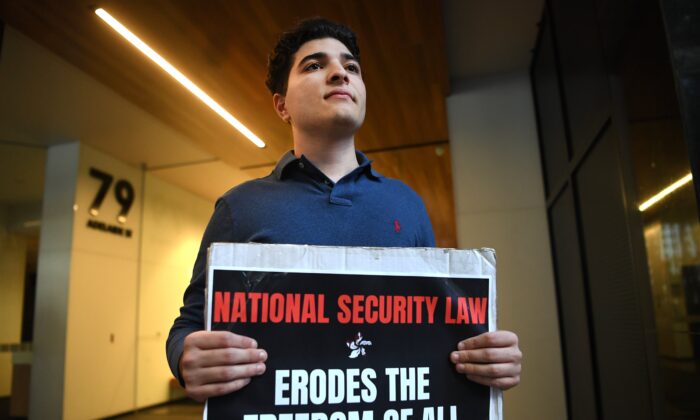 Activist Drew Pavlou takes part in a protest in support of Hong Kong, outside the Chinese consulate in Brisbane, Australia, on May 30, 2020. (Dan Peled/AAP Image)
Thinking About China

On July 21, Pavlou, an outspoken critic of the Chinese Communist Party (CCP), most often in his home country of Australia, arrived outside the Chinese embassy in London. His purpose was simple: to hold a protest against the Chinese government’s campaign against Xinjiang’s Uyghur people. It wasn’t his first protest against the CCP’s rampant human rights abuses, and it likely won’t be his last.

Things took a surprising turn, however, when London’s Metropolitan Police arrived and arrested both Pavlou and a British journalist—Harry Allen—who was covering the protest. Pavlou then spent about 23 hours incommunicado, under detention, and was interrogated without first being given access to legal counsel. Australia’s foreign service wasn’t given early access either.

It turns out that someone, likely a Chinese netizen, had become aware of the planned protest and emailed the Chinese embassy a false bomb threat from a fake email address, signing it “Drew Pavlou.” The embassy, in turn, notified the police, and so the saga began. And it’s far from over.

As often is the case, Chinese authorities have managed to create a worldwide media sensation over what would likely have been a minor protest, attracting little to no attention. It has also put a spotlight on what appears to be a quickly growing and very recent phenomenon: fake emails sent by overzealous netizens to silence critics abroad.

These fakes are often laughably bad, as are the ones claiming to be from Pavlou. Since the initial email to the embassy, a flurry of emails have been sent to UK lawyers, politicians, and nongovernmental organization (NGO) workers. This morning, even though I’ve never met him and can’t claim to know him, one arrived in my inbox.

The email I received spoofs an email that’s supposed to belong to him, and at the same time, purports to be from the UK’s Crown Prosecution Service. I’ve filed the email with the UK police for impersonating the UK prosecutor and impersonating an individual.

This is nothing new. We at Safeguard Defenders have received fake emails like this before. One claims to be from the Hong Kong national security police, threatens a co-worker of mine with arrest if she goes to Hong Kong, and warns of the possibility of being extradited there. In the UK, the hub for Chinese and Hong Kong human rights activism in Europe, lawyers, politicians, and NGO people alike have received similar emails, all within the past year.

With all this going on, it’s surprising that this knowledge doesn’t seem to exist within the UK police force. If the UK police knew how common this tactic has become, it’s unlikely that they would have arrested a known human rights activist and a UK journalist so quickly. They would have simply stopped the protest and launched an investigation into the origins of the emails.

Luckily for Pavlou, the more of these fake emails that arrive, the more obvious it is that he’s innocent. And the more attention this drama receives, the faster police can change their investigation: from investigating his alleged bomb threat to investigating Chinese netizens who (with or without Chinese government approval) campaign to silence critics abroad, including on UK soil.

There’s nothing surprising about these developments. However, it’s a lesson for both UK and other European police forces in how to handle what’s certainly going to become a more common—and, in time, more sophisticated—tool for suppressing human rights here in Europe itself.