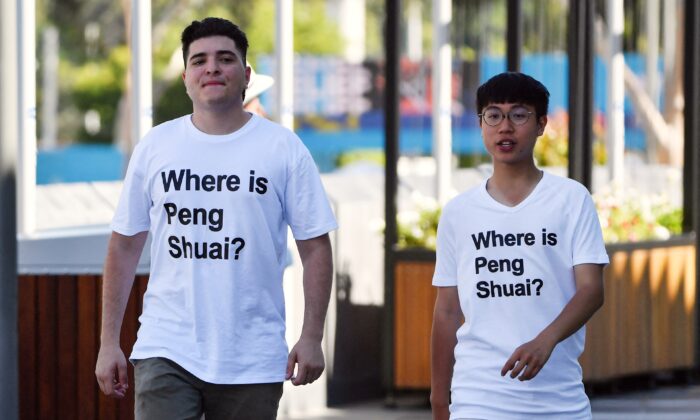 Australian human rights campaigner Drew Pavlou (L) is pictured wearing a "Where is Peng Shuai?" T-shirt, referring to the former doubles world number one from China, on the grounds outside one of the venues on day nine of the Australian Open tennis tournament in Melbourne on Jan. 25, 2022. (Paul Crock/AFP via Getty Images)
UK

Activist says he is being set up
By Lily Zhou

A human rights activist said he was arrested in London on Thursday while protesting outside of the Chinese embassy over what he alleged was a fake bomb threat.

Drew Pavlou, in a series of Twitter posts published on Friday and Saturday, said he was being set up.

The 23-year-old Australian, a vocal critic of the Chinese Communist Party, said he was holding a small and peaceful protest outside of the embassy when the police arrested him and his friend, who was identified only as Harry.

“They said the Chinese embassy had reported me as a terrorist, as a bomb threat. I was so shocked,” Pavlou said.

He said the Chinese embassy forwarded an email purported to be from him, which said he would bomb the embassy over the Uyghur genocide.

He said the email address was “drewpavlou99@proton.me” and called on Proton CEO Andy Yen to help provide the IP address on the email.

Pavlou claimed he was held by UK police for 23 hours and who he said denied him access to a lawyer for more than 10 hours.

He also said the police denied him access to Australian consular authorities.

“They pressured me to hold [an] interview without lawyers present, I was only allowed one 5-minute monitored phone call after 20 hours. They seized my phone and said I can’t leave the country, I face a SEVEN YEAR PRISON SENTENCE,” he wrote on Twitter.

Pavlou also claimed the police pressured him into surrendering his phone password by threatening to charge him “with crimes related to obstructing investigation which carry [sic] a further 5-year prison sentence.”

Pavlou said Harry was “arrested on ‘conspiracy’ charges” for filming his arrest, and his phone and laptop were confiscated.

‘In Possession of a Quantity of Glue’

The Metropolitan Police Service, in a statement by email to The Epoch Times in the afternoon local time on July 23, said, “At around 16:30 hrs on 21 July, a man was detained at the Chinese Embassy in Portland Place due to his suspicious behaviour. He was found to be in possession of a quantity of glue and had attempted to glue his hand to the outside of the embassy building.

“The man was arrested on suspicion of trespass on diplomatic premises, communicating false information to make a bomb hoax and criminal damage,” the statement said. “He was taken into custody at Charing Cross police station.

“Having been booked into custody, the man was offered legal advice and a duty solicitor was called at 20:22 hrs on 21 July. … The man was released from custody at 15:56 on 22 July.”

The police indicated that he has not been charged.

The police in a separate email said, “A second man, aged 22, was arrested on suspicion of trespass on diplomatic premises, communicating false information to make a bomb hoax, and criminal damage.”

The police indicated the second man hasn’t been charged either.

Pavlou later told The Epoch Times in response to the police statement: “Yes, I used glue to put Taiwan flag and my hand on the front gate of the embassy. Totally peaceful civil disobedience. I didn’t disrupt anyone, didn’t cause any damage.”

When asked about the police statement that he was offered legal advice after four hours, Pavlou said: “That is absolutely not true, I was held incommunicado until at least 23:30. I wasn’t able to even talk to a lawyer until 14:00 the next day, so almost a full 22 hours after being detained. I haven’t been charged but I’m under investigation, they gave me my passport but threatened I could be arrested at airport if I tried to leave the country.”

‘Devotes His Energies to Highlighting’ Atrocities

The student activist, who traveled to the UK to highlight at Wimbledon the disappearance of Chinese tennis player Peng Shuai, was planning to return to Australia on Sunday. He wrote on Twitter that he had been” couch surfing this entire time” and will be homeless if he was “stuck here for months.”

On Saturday morning, Pavlou wrote on Twitter that he got in contact with the Australian High Commission.

The student activist has staged numerous protests in Australia against the Chinese regime over the human rights abuses against the Tibetans, the Uyghur people, and Hongkongers.

Reacting to the news on Twitter, Rogers praised Pavlou as “a totally peaceful young man who heroically devotes his energies to highlighting” the human rights atrocities in Xinjiang and Tibet, the dismantling of Hong Kong’s freedoms, and CCP repression.

“He should be applauded, not arrested,” Rogers wrote.

The Chinese Embassy in London didn’t respond to The Epoch Times’ request for comment.