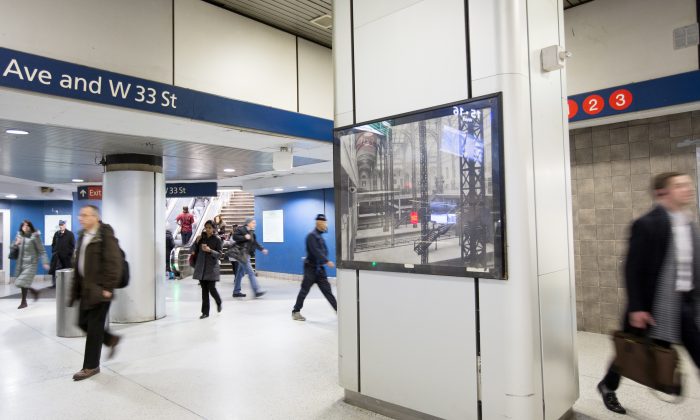 A photo of the original McKim, Mead & White Penn Station on display in the Amtrak concourse of Pennsylvania Station in New York, on Feb. 6, 2017. (Samira Bouaou/Epoch Times)
New York

NEW YORK—Traveling through the nation’s busiest transit hub, New York’s Pennsylvania Station, will become even more cumbersome as Amtrak takes some tracks out of service for repairs after recent derailments disrupted travel for hundreds of thousands of commuters in recent weeks.

The construction will create further headaches for passengers, but Wick Moorman, Chief Executive Officer of the national passenger rail company, said in a call with reporters on Thursday that replacing some of the infrastructure is “critical.”

“We all clearly understand there has been a sense of frustration,” Moorman said. “It is our goal to cause the least amount of disruption.”

The bulk of work should be finished by the end of summer 2017, but some weekend work is likely to stretch as late as June 2018.

New York, with its crowded station and decaying, century-old rail tunnels underneath the Hudson River, is a chokepoint on Amtrak’s Northeast Corridor, which runs from Washington to Boston and is the operator’s only profitable section.

Moorman said on Thursday that he does not anticipate any “substantial reduction in funding” at the end of the federal budgeting process for next year. Amtrak has not been “adequately funded” for a “fairly long period of time,” he said.

He said officials are still determining how much the expedited repair program will cost, but the number will be in the “tens of millions of dollars” and should become clear “within the next few days” after meetings with NJ Transit and the Long Island Rail Road (LIRR) officials.

Whatever the final price tag, Amtrak will pay for it by reallocating other funding in this year’s budget that was supposed to pay for technology upgrades, Moorman said.

Amtrak owns and operates the station and leases tracks and space to NJ Transit and LIRR.

Work will begin in the most complex part of the station on its western side. In that area, routes are sorted for trains entering from the Hudson River tunnels and LIRR’s West Side Yard.

The railroad will also create a new task force to review safety and security processes and a mobile response team for overcrowding situations, Moorman said.