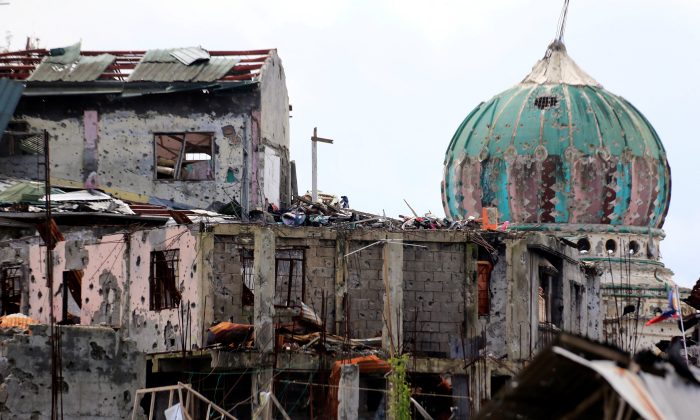 MANILA—The war in the Philippine city of Marawi saw Islamic terrorists execute civilians or use them as human shields, while military air strikes killed non-combatants and may have been used in excess, an Amnesty International report said on Friday, Nov. 17.

The investigation by the rights group on the bloody five-month battle was based on interviews with 48 witnesses from September until early November and called for an independent inquiry.

The conflict in Marawi, the only predominantly Muslim city in the mainly Catholic Philippines, was the country’s biggest and longest battle since World War Two. More than 1,100 people, mostly insurgents, were killed, including 166 soldiers and 47 civilians, according to the authorities.

At least 350,000 people were displaced and large parts of Marawi have been decimated by air strikes.

Witnesses described at least 10 separate incidents where at least 25 people were executed by the Muslim extremists because they were Christians. Amnesty described those as war crimes.

It also said 10 hostages may have been killed in a single bombing run by the armed forces, and said an independent inquiry should include an assessment as to whether the air strikes were proportionate to the threat.

“They must initiate a prompt, effective and impartial investigation into whether its bombings of civilian neighborhoods was proportional under international humanitarian law,” Tirana Hassan, Amnesty International’s crisis response director, said in a statement.

“The Philippine authorities must bring those responsible for torture and other violations to justice and ensure that the victims receive adequate reparations.”

Major-General Restituto Padilla, armed forces spokesman, said the military was aware of the report and would respond in full later. He said troops were given strict instructions to observe and respect international humanitarian law and human rights.

“We will not tolerate and condone these abuses and will act on them,” he told a regular news briefing on Friday.

The 34-page report, “The Battle of Marawi: Death and destruction in the Philippines”, quotes a survivor who said he was spared by rebels because he could recite the “shahada”, a statement of Islamic faith, but a Christian ambulance driver was shot dead because he could not do the same.

Other survivors said hostages were executed or physically abused, forced into labor and used as human shields.

Some hostages who escaped alleged they were detained and tortured by security forces who suspected them to be militants. Amnesty said it talked to eight men, including seven Christians, who said they were badly treated by the authorities.

“I was punched and kicked. They tied our hands and feet with electrical wire,” the report quoted one survivor as saying. “The military was angry because 13 of their men were killed.”

Amnesty noted that the military was responding to concerns about looting by soldiers but “must follow through on promises of compensation”.