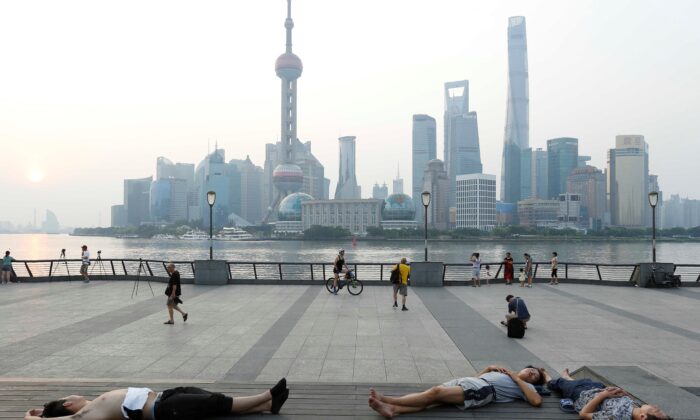 People sleeping on the waterfront to keep cool in Shanghai, on July 25, 2017. (STR/AFP via Getty Images)
China Business & Economy

Power cuts and limitations imposed in parts of China amid extreme heat waves have caused production halts and supply chain disruptions. Coming after two years of pandemic-related restrictions, the restrictions have added to the difficulties of foreign companies like Tesla.

Tesla, seen as the most influential foreign auto giant in China, is facing operating woes due to the country’s electricity limitations.

On Aug. 15, the Shanghai Municipal Commission of Economy and Information asked its Sichuan counterpart, by a written letter, to allow suppliers of Tesla and state-owned Shanghai Automotive Industry Corporation (SAIC) access to power resources in a bid to secure production, according to Chinese news media.

Southwestern China, including Sichuan Province and neighboring city Chongqing, have been the worst hit by the record-breaking heat wave.  Extreme temperatures have baked the region since July, causing authorities to limit or cut industrial-use power in some areas.

In the province’s southeastern city of Yibin, industrial enterprises were subject to an overall halt of production starting Aug. 15. The shutdown, originally slated to last until Aug. 20, was extended to 10 days, according to industry officials quoted by Chinese financial news service Caixin on Aug. 21.

The move was a blow to Tesla’s battery supplier Contemporary Amperex Technology Co., Ltd., (CATL) which has a large lithium battery factory in Yibin.

Meanwhile, all industrial power users in the Bishan district of Chongqing, including BYD Company, were reportedly requested to close from Aug. 15 to 24 due to high temperatures.

CATL represented 34.8 percent of the world’s electric vehicle battery market in the first half of 2022, making it the global top battery producer, while BYD is in the third place, with a market share of 11.8 percent, according to market research company SNE Research, cited by Tesla’s news site.

In 2021, Tesla’s Shanghai facility accounted for half of its global deliveries. However, Tesla’s Shanghai production slowed in 2022 due to a March Omicron outbreak. Tesla suspended production for three weeks to comply with harsh Chinese Communist Party (CCP) zero-COVID measures.

According to data by Tesla, in the second quarter, the company produced a total of 258,000 vehicles, a 15 percent drop from the 305,000 produced in the first quarter.

This summer’s extreme heat wave triggered another strict power-saving policy from the CCP, pushing Tesla into an even tougher corner.

Toyota’s Chengdu plant was also forced to shut down. On Aug. 22 it restarted factories using its own electricity generators.

Joerg Wuttke, president of the European Union Chamber of Commerce in China, said in an interview with German media outlet The Market in April that China is losing its advantage, with more and more foreign companies moving their supply chains out of China to other countries.

Wuttke said he has never seen so many companies looking to source from Asian countries other than China. For these companies, that may mean higher procurement costs, but it is better than nothing.

CCP authorities have no exit strategy for the zero-COVID policy, Wuttke said, which leaves many companies with no choice but to look elsewhere.

The CCP’s adherence to zero-COVID restrictions caused logistical hurdles and production stoppages for U.S., EU, and Japanese companies in China. As a result, many of them have withdrawn from the country.

What happened in Shanghai has alerted foreign companies in other areas of China, that they could encounter the same issues.

Although Chinese banks have since doubled capital for infrastructure projects to boost the country’s economy, the move mostly favored state-owned enterprises, rather than private and foreign companies.

A survey conducted by the EU Chamber of Commerce in China at the end of April showed that about 23 percent of the companies questioned were considering shifting their current or planned investments out of China; while 78 percent said that China’s business environment was becoming less attractive due to its zero-clearance curbs.

When asked about ideal investment relocation, 16 percent said they prefer Southeast Asia, while 18 percent were looking somewhere in the Asia-Pacific region. Nineteen percent considered moving to Europe, 12 percent to North America, and 11 percent to South Asia.

The American Chamber of Commerce in Shanghai also released a questionnaire of U.S. companies in China in June. The results showed that 90 percent of the companies surveyed had lowered their revenue expectations for the year, and more than a quarter of the companies said they had cut back on their investment plans in China.

About a quarter of respondents are accelerating the localization of supply chains while moving production of global goods abroad, according to the American Chamber of Commerce survey.

As for Japanese companies, a  July Nikkei News poll of 143 Japanese companies in China showed that more than 40 percent said they were unsure how to adjust their business in China in the next 10 years and felt uncertain about development prospects there.

More than 50 percent of the companies surveyed believed that carrying on commercial activities in China is increasingly risky.

Those risks may be caused by the CCP’s draconian anti-pandemic regulations, trade friction with the United States, and the potential for military attack on Taiwan, Nikkei News said.