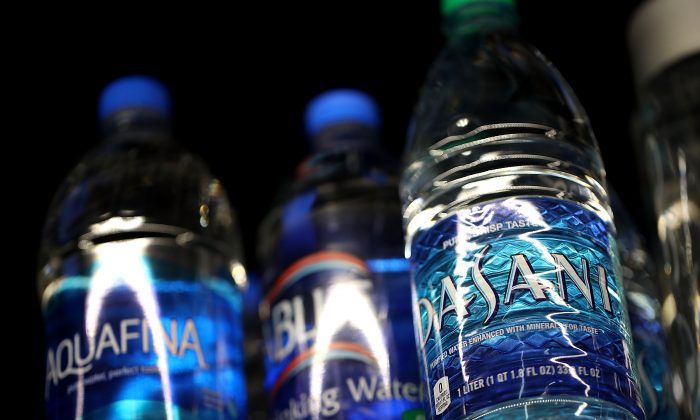 Bottles of water are displayed on a shelf at a convenience store in California on March 16, 2018. (Justin Sullivan/Getty Images)
US News

Amid Heat Wave, Official Warns Drivers Not to Leave Water Bottles in Cars

Another fire official issued a warning amid a heatwave that is slated to impact the East Coast of the United States.

Currently, high temperatures across much of the East Coast are in the high 80s or 90s Fahrenheit.

A fire official in Manilus, New York, noted that leaving a plastic bottle filled with water in a hot car can start a fire in a few minutes under the right set of circumstances, CNY Central reported on July 16.

“It would need to be a full water bottle, that is filled to the top of the water,” Manlius Firefighter Jay Symonds said.”The water and the plastic create a magnifying effect, and could essentially set upholstery on fire or a piece of plastic on fire.”

Symonds demonstrated to the news outlet, which noted that he carried out his experiment. He used a piece of paper and angled the bottle so the sun would shine a beam of light on the paper, which eventually burned.

“It does give truth to the myth that you can set your car on fire with a water bottle that’s full,” he told the outlet. “The ignition temperatures of those items are about 400 degrees so it would take some time to achieve that and you need low humidity, dry heat, but it is possible that it would start a fire,” Symonds said.

He recommended motorists to store water bottles in the trunk as long as it is out of direct sunlight.

Meanwhile, Oklahoma’s Midwest City Fire Department conducted a test, according to a Weatherboy report in April, that showed sunlight reflected by a water bottle could reach 250 degrees.

“The sunlight will come through, when it’s filled with liquid, and act as a magnifying glass as you would with regular optics,” fire official David Richardson said, according to the report. “It uses the liquid and the clear material to develop a focused beam and sure enough, it can actually cause a fire, a combustion,” Richardson explained.

In recent years, other officials have shared videos on social media that demonstrate how it can happen.

The dangerous heat wave that’s going to roast two-thirds of the US through the weekend has begun.@ReporterBlayne has the latest on the hot temps from St. Louis. pic.twitter.com/lbpl180mkd

From the Midwest to New England, the hottest temperatures of the year are expected to hit, according to AccuWeather.

Very hot and humid conditions are expected across the Eastern US for the end of the week into the weekend. In addition to extremely hot daytime temperatures, overnight lows in most areas are not expected for fall below the mid-upper 70s, or even the lower 80s in some urban areas. pic.twitter.com/jtgWH3rnvt

The National Weather Service warned on July 16: “Very hot and humid conditions are expected across the Eastern US for the end of the week into the weekend. In addition to extremely hot daytime temperatures, overnight lows in most areas are not expected for fall below the mid-upper 70s, or even the lower 80s in some urban areas.”

Officials in major cities, including New York, have issued warnings.

“Hot weather is dangerous and can kill. People with chronic physical and mental health conditions should use air conditioning if they have it, and get to a cool, air-conditioned place if they don’t,” New York City Health Commissioner Dr. Oxiris Barbot said in a statement. “During times like these, we all need to look out for each other. Be a buddy and check on your family, friends, and neighbors who are at risk and help them get to a Cooling Center or another cool place—even if for a few hours.”