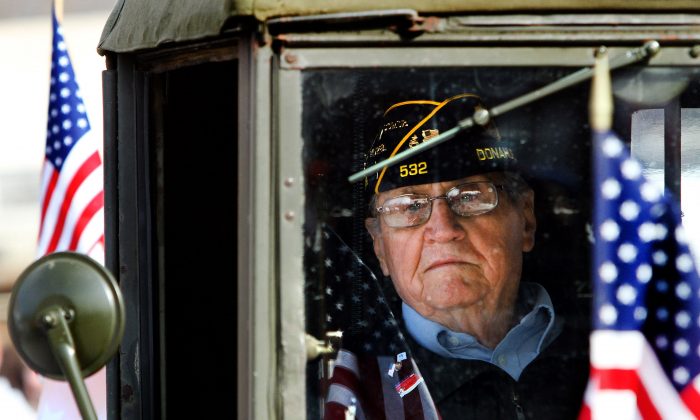 Throughout my life, I have always held the highest honor of American patriotism is exemplified by respect for the men and women who serve in our military.

Military service is the pre-eminent hallmark of honor, duty, and country and deserves America’s dignity, appreciation, and esteem.

Hopefully, the solemn national holidays of Veterans and Memorial Day will be complemented by America’s renewed passion for honoring our veterans, especially those marginalized by poverty, homelessness, and health care deficiencies.

In my May 30, 2014, Epoch Times column titled “Veterans Medical Scandal: Reigniting American Altruism,” I argued, “As one walks the streets of our cities, America flags are proudly displayed everywhere. Our flag is more than a fabric—it is our sacred symbol of respect for America. It reminds us of the unity, devotion, and sacrifices made to preserve our freedom.”

But a travesty has infected our great land, for as we now walk American cities, the dignity of our flag is contradicted by the tragedy of dishonored homeless veterans, many with mental health needs. These patriots are further victimized by society’s indignation, contempt, and abandonment.

Betraying Our Veterans: The Scandals Continue

Aside from the appalling and well-publicized veteran’s medical scandal that blistered America’s conscience by painting a picture of treatment delays, records falsification, and egregious incompetence—the scandals continue.

Recently, I was appalled by a published report detailing contemptuous, unjust, and self-serving misconduct dismissals of soldiers with mental health and suicidal issues.

In the report, Staff Sgt. Eric James, a United States Army sniper who served two tours in Iraq, recorded proof that soldiers with mental health disorders, suicidal tendencies, and traumatic brain injuries were being kicked out of the service. The reason for their terminations was misconduct, rather than treating medical health issues, and this reprehensible branding was preventing them from receiving the health care treatment they deserved.

James made over 20 hours of secret recordings with therapists and officers at Fort Carson to expose this scandal.

As I listened to some of these recordings, the disturbing reprimanding of James—and even apparent ignoring his talking about wanting to commit suicide—was heart-wrenching.

We must react with profound urgency to the staggering rise in military suicides.

We must react with profound urgency to the staggering rise in military suicides. According to a Department of Veterans report, an average of 22 veterans commits suicide every day—8,000 per year.

The Lesson Congress Should Learn From the VA Scandal

This is an America scandal of the most tragic consequence, with terminated soldiers not eligible for the retirement and health care benefits that are afforded to those honorably discharged.

Fort Carson must live up to its mission statement. According to its website, it “provides first class support to soldiers and families and enables unified actions with community, state, and interagency partners for the greater good of our soldiers.”

The United States Army must also respond with a heart of compassion to its suffering sons and daughters.

According to the National Coalition for Homeless Veterans (NCHF), the factors influencing veteran’s homelessness include a shortage of affordable housing, a substandard income, post-traumatic stress disorder (PTSD), substance abuse, and lack of family and societal support.

The NCHF website highlights that although a flawless count is impossible, there are an estimated 49,933 homeless veterans throughout America on any given night.

The Coalition for the Homeless presents a snapshot of 59,305 homeless in municipal shelters in New York City alone (September 2015), some of whom are veterans, still proudly wearing uniform pieces or holding signs pleading for help that detail their military service.

America must respond to an inner moral call and rise by igniting an ethical renaissance. The principles of character, compassion, and altruism must be the heartbeat of America.

When America’s heartbeat pulsates with putting the golden rule into action: “Do unto others as you would have them do unto you,” the reawakening of the nation will begin its resuscitation.

America, let us honor verses from America the Beautiful, “O beautiful for heroes proved in liberating strife, Who or more than self their country loved, And mercy more than life.”

Vincent J. Bove, CPP, is a national speaker and author on issues critical to America. Bove is a recipient of the FBI Director’s Community Leadership Award for combating crime and violence and is a former confidant of the New York Yankees. His newest book is “Listen To Their Cries.” For more information, see VincentBove.com