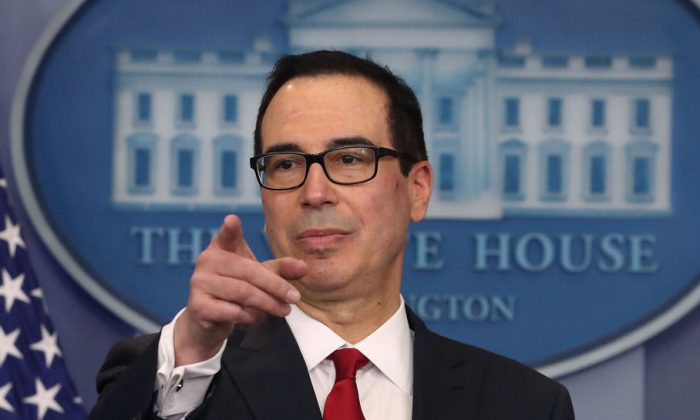 Treasury Secretary Steve Mnuchin talks about the new U.S. tax code, during a briefing at the White House in Washington, DC on Jan. 11, 2018. The Treasury department approved submissions for Opportunity Zones in various states, a new incentive program in the Tax Cuts and Jobs Act. (Mark Wilson/Getty Images)
Trump Administration

Emerging markets offer attractive investment opportunities, and now thanks to a provision of the new tax law, Americans will have a chance to invest in their own emerging markets and help develop under-served communities in the United States.

A little publicized incentive in the Tax Cuts and Jobs Act, which is designed to bring opportunity to economically distressed areas, has started to take shape.

The Department of the Treasury and the Internal Revenue Service announced the first round of “opportunity zone” designations for 18 states on April 9. The designation will apply for 10 years.

“I am very excited about the prospects for Opportunity Zones,” Treasury Secretary Steven Mnuchin stated in a press release.

Attracting needed private investment into these low-income communities will lead to their economic revitalization and ensure economic growth is experienced throughout the nation.
— Steven Mnuchin, secretary, Treasury

“Attracting needed private investment into these low-income communities will lead to their economic revitalization and ensure economic growth is experienced throughout the nation.”

The opportunity zones project has the potential to become America’s largest economic development program, according to the Urban Institute, a Washington-based think tank.

“This is an exciting moment in the development of a new, sizable federal incentive for investing in undercapitalized communities,” Brett Theodos, a senior research associate at Urban Institute, wrote in a report.

The program offers significant tax breaks to private investors. It allows investors to defer taxes on any prior gains for 10 years, if the gains are reinvested in a qualified opportunity fund, an investment vehicle organized to make investments in opportunity zones.

According to the estimates, U.S. investors hold nearly $2.3 trillion in unrealized capital gains in stocks and mutual funds, a significant untapped fund.

The activities and projects that can be financed are broad, according to Theodos. “Funds can finance commercial and industrial real estate, housing, infrastructure, and current or startup businesses,” he noted.

More than 52 million Americans live in an economically struggling community, according to the 2017 Distressed Communities Index. While many cities and towns in the United States are flourishing, these communities are left behind in terms of investment and jobs growth.

Sen. Tim Scott (R-S.C.), who grew up in poverty in a single-parent household, sponsored the concept of opportunity zones. He introduced the bipartisan-backed Investing in Opportunity Act and made it part of Trump’s tax reform package.