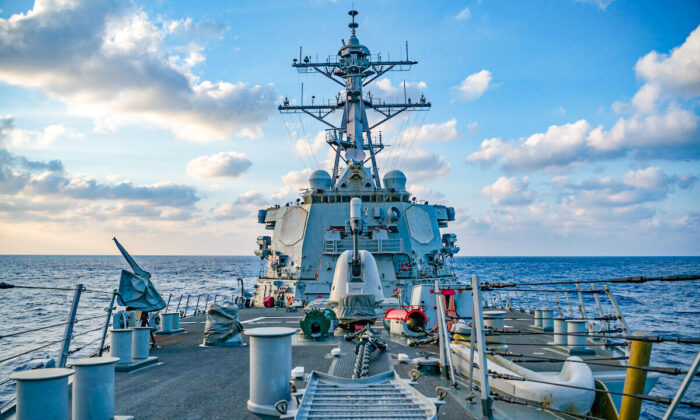 Type 055 tested its YJ-21 hypersonic anti-ship ballistic missile (ASBM) and another missile that appears to have a maneuverable reentry vehicle (MaRV).

The Navy has no effective defense against hypersonic missiles and none of its own. Neither does it have supersonic anti-ship cruise missiles (ASCMs). A lack of layered security options puts American ships at risk of rapid defeat in a war at sea. China can destroy our aircraft carriers, and their accompanying cruisers and destroyers, with its nuclear-capable hypersonic ASBMs.

China’s two new cruisers, named the Anshan and Wuxi, joined the world’s largest navy by the number of ships, the People’s Liberation Army Navy (PLAN). It has 355 ships and submarines, according to the latest U.S. Department of Defense report to Congress. The U.S. Navy has just 298.

America’s naval shipbuilding industry has insufficient facilities for design, supply lines, shipbuilding, and maintenance, causing our multi-billion-dollar fighting ships to retire faster than we can build new ones.

Armed with the YJ-21 and MaRV missiles, the Type 055 could destroy isolated U.S. cruisers and destroyers with impunity. The supersonic YJ-21 has a range of up to 930 miles. Type 055 has 112 vertical launch cells.

Beijing believes that sometimes the best defense is a good offense, and wants to make the PLAN a global blue water navy. It is rapidly transitioning from a focus on “near seas” to “far seas,” and will have at least five carrier strike groups—each including a carrier, cruisers, destroyers, and submarines—by 2035.

The PLAN now has five Type 055s and plans to increase that number to eight “in a first batch,” according to the South China Morning Post.

The PLAN calls the 12,000-ton Type 055 a “destroyer.” Compare it to the U.S. Navy’s 15,000-ton Zumwalt-class destroyer, dogged with an obsolete mission of bombarding shore targets, engine trouble, and cost overruns that brought the planned 32 ships down to just the three already in existence.

Each new Zumwalt now costs the taxpayer $4.5 billion, compared to the $1.9 billion for the tried and true Arleigh Burke. Yet incredibly, the Zumwalt lacked ammo, anti-submarine torpedoes, and had “fewer cells to pack land-attack missiles than Arleigh-Burke destroyers (96), Ticonderoga-class cruisers (122), or Ohio-class cruise-missile submarines (144)—all of which were cheaper, and the last of which is stealthier.”

Meanwhile, military officials in the Pentagon are trying to convince Congress to retire all 22 American cruisers in the next 10 years to be replaced by Arleigh Burkes. Modernizing an existing cruiser to keep it operational for another 10 years can cost as little as $200 million.

America’s supposedly large defense budget of $813 billion, “more than the next 11 countries,” as the Guardian says, is not translating into relative power when China’s defense budget of $230 billion is expanding its navy while we shrink ours.

Something doesn’t add up. The Biden administration, which shrank the prior administration’s plans for a submarine force from as many as 78 nuclear attack submarines (SSNs) to as little as 66, is part of the problem.

The Pentagon has failed to take years of repeated advice from U.S. Navy fleet commanders to improve maintenance, extend the life of existing ships, and develop and deploy supersonic anti-ship cruise missiles to protect them from adversaries.

As retired U.S. Navy Capt. James Fanell, former director of intelligence for the U.S. Pacific Fleet, wrote in these pages that the recent sinking of Russia’s flagship cruiser, the Moskva, by two outdated Ukrainian ASCMs, has lessons to which we better listen.

“It is not too harsh to state that the failure of defense officials to prepare the U.S. Navy for the ASCM threat is tantamount to sending the fleet to certain destruction and defeat in high-intensity combat operations that are not too far distant on the horizon,” he wrote on April 22.

Fanell said in an email: “We don’t have the shipyards to increase production, so we have to increase the nation’s shipbuilding infrastructure, which means we need the USG to incentivize this critical, national security industry. That takes time, even if we started in earnest today. The USN’s top line is headed to 280 ships, 180 degrees out from what the USN leaders and former SECDEFs have called for, which is a 350 manned ship Navy or even a 500 manned and unmanned ship Navy.”

“Over the past decade the U.S. Navy has invested in and fielded defensive systems that are designed to deceive and defeat enemy ASCMs (super or subsonic) and ASBMs,” he added.

“But what we have failed to field is our own family of supersonic ASCMs that can be launched from ships, submarines and aircraft. The fundamental issue is that the USN leadership over the past two decades has stubbornly rejected investing in supersonic, long-range ASCMs as a primary offensive weapon system. Instead, the establishment has sought to rely solely on aircraft carriers and fast attack submarines launching ‘forward from the sea’ attacks over land, instead of building a fleet that can fight and win a war-at-sea,” Fanell wrote.

China and Russia have surprised America time and again with their aggression against places like Ukraine and the South China Sea. Deterrence has failed despite our nuclear weapons and pride in our high-technology defenses. Ukrainians are slugging it out on a battlefield and losing their cities in the process.

What Russia is doing to Ukraine, China could eventually do to the United States. Even if China ultimately lost, we could lose many of our cities in the process. A massive surprise attack against the U.S. military in general, and the Navy in particular, must be planned for and deterred at a more granular level than simple hand waving about nuclear deterrence.

We need to be able to fight and win a conventional war against Russia and China, which will deter them and ultimately keep them from escalating toward nuclear war.

Without a stronger deterrent threat, America must be prepared for Beijing’s continued incrementalism that could result in nuclear-capable naval ships off America’s coasts, Alaska, and Hawaii, in just a few years. They could dock in Cuba, Venezuela, West Africa, the Azores, Pakistan, and Sri Lanka, among other places. They already have temporary access to the Solomon Islands and permanent access to Djibouti.

By the time the Chinese Communist Party (CCP) gets five or more carrier strike groups, it can defend its global trading empire. Few democracies would have the stomach to oppose the complete and global dominance of the CCP at that point.

Fixing the problem requires diminishing China’s economy, which is about 10 times that of Russia’s, to stop its ability to continue its arms buildup. And we need to increase our defenses by doubling or tripling our efforts, which would require doubling or tripling defense budgets. Then we need to use our military to defend space rather than successively back our red lines toward our capital cities.

Those are the unfortunate costs and risks of effectively defending democracy and deterring a war that is already on the horizon. It will require belt-tightening and steely nerves, but it must be done as our economy may not always be able to sustain even current defense budgets.

Now is the time to stop the CCP. Now or never. Time is not on our side.