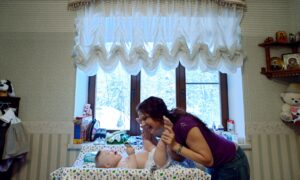 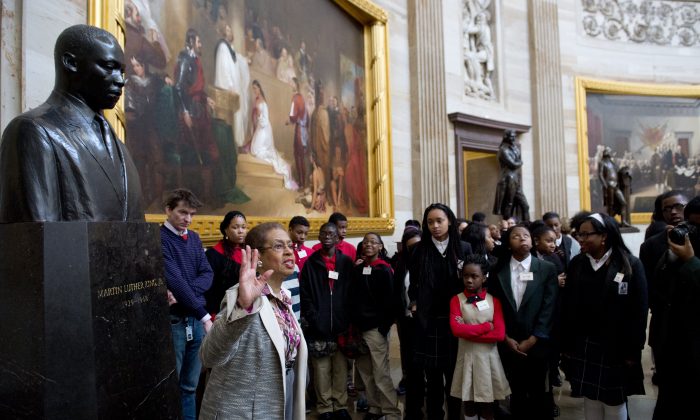 U.S. Congressional Delegate Eleanor Holmes Norton speaks with students about Black History Month alongside a statue of Martin Luther King Jr., during a tour of the Rotunda at the U.S. Capitol in Washington, D.C., on Feb. 20, 2014. (Saul Loeb/AFP/Getty Images)
Opinion

The immortal words authored by Thomas Jefferson in the Declaration of Independence honor America and all who cherish freedom, liberty, and human dignity.

“We hold these truths to be self-evident, that all men are created equal, that they are endowed by their Creator with certain unalienable Rights, that among these are Life, Liberty, and the pursuit of Happiness.”

These words must eternally inspire our dedication to social justice, which can only be obtained when the dignity of every human person is respected.

Respect for human rights is the basis of moral legitimacy and the criteria of government’s rightful authority.

Respect for human rights is the basis of moral legitimacy and the criteria of government’s rightful authority.

This respect is also a reflection of character, not only of individuals, but of a nation. Respect always stands diametrically opposed to discrimination, prejudice, and racism. These vices are dehumanizing as they dishonor the moral heartbeat of humanity demanding respect for our neighbor.

Every person being deserves dignity and respect, as we are all members of the same human family.

This respect must extend to all, including those who are different by sex, race, color, social conditions, language, ethnicity, age, country of origin, or religion.

Racism in America: A Reality Check

In my article titled “Racism in America: Time for Unity,” published in the June 26, 2015 edition of the Epoch Times, I emphasized the heroism of the Tuskegee Airmen, World War II combat aviators representing America’s courage, service, and patriotism.

I argued that “during a time when these men could not eat, be educated, ride the bus, or use the same restrooms as white men, they valiantly served America.”

Yet, despite their courage and the patriotism of countless other black Americans, racism continues in America as witnessed on June 17, 2015. On that fateful day, a white supremacist shot nine people dead at the Emanuel African Methodist Episcopal Church in Charleston, because they were black.

Each February, America commemorates Black History Month, a time to honor achievements by black Americans throughout our history.

Since 1950, mayors throughout American cities have issued proclamations honoring this celebration.

The civil rights movement of the 1960’s dramatically influenced diversity in America, with a clarion call for respect, dignity, and human rights.

Black history, and the differences of all people must be celebrated, as is it reflects the diversity which makes America unique.

In another article titled “Law Enforcement and Race: FBI Directors Hard Truths,” published in the Feb. 20, 2015 edition of the Epoch Times, I memorialized the “hard truths” FBI Director James B. Comey urged America to address.

“We can choose to have an open and honest discussion about what our relationship is today—what it should be, and what it needs to be—if we take time to better understand each other,” Comey said addressing police and community relations.

Complementing Director Comey’s words, the FBI is committed to enhancing diversity as exemplified in their annual celebration of Black History Month each February, which I have attended many times at their Newark Field Office.

An event held on Friday, Feb. 12, 2010, Abraham Lincoln’s birthday, comes to mind with a keynote delivered by Dr. Eddie S. Glaude Jr., chair of the Center for African American Studies at Princeton University.

America is at a crossroads, especially with police-community relations and the need for resolution, reform, and renewal.

Inspired by the words of Jefferson that “all men are created equal,” as well as the prophetic words of Lincoln proclaiming “a new nation, conceived in liberty and dedicated to the proposition that all are created equal,” it is time for reawakening the nation with respect, dignity, and diversity.