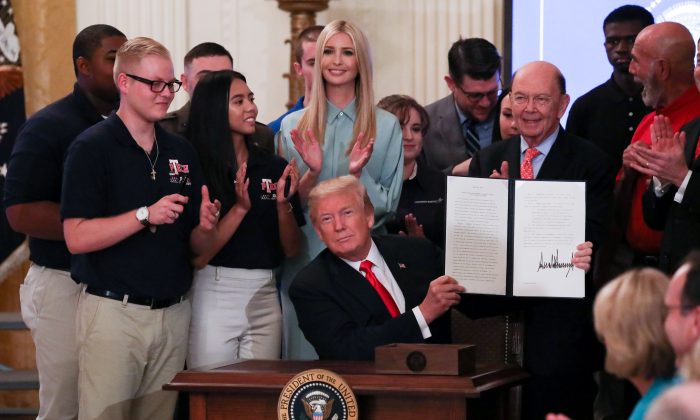 President Donald Trump signs an executive order during the "Pledge to America’s Workers" event in the East Room of the White House on July 19, 2018. (Samira Bouaou/The Epoch Times)
Trump Administration

America’s Got a Talent Problem, but the Trump Administration Has a Plan to Fix It

A new White House initiative aims to fix the skills gap and create 3.8 million jobs in the next 5 years
By Emel Akan

Businesses across the United States are suffering from a talent shortage, and the problem is growing. As of May, there were 6.6 million unfilled jobs, a 17 percent increase in the last year. To resolve the problem, the White House launched an initiative to bring back vocational education in high schools.

President Donald Trump signed an executive order on July 19 that creates a national council charged with developing a strategy to grow the workforce.

“Every day, we are lifting our forgotten Americans off the sidelines, out of the margins, and back into the workforce,” Trump said during the “Pledge to America’s Workers” event at the White House.

“Companies are pouring back into our country—companies that frankly left 10 and 20 years ago—and they’re coming back and we need people to work for those companies,” Trump said. “We need talented people. We need people with training.”

The new National Council for the American Worker will be made up of top officials across the government. The council will work with the private sector and state and local governments to expand vocational education, career and technical training, and on-the-job training. The initiative focuses on training students as well as mid-to-late career workers.

“We also have to be thinking about the mid-to-late career worker, who needs to be re-trained and re-skilled,” Ivanka Trump, senior adviser to the president, told CNBC. “As a country, by and large, all investment in education stops at the age of 25, and that doesn’t work in such a fast-changing, increasingly digital economy.”

According to Ivanka Trump, nearly 1 in 5 Americans work in jobs that didn’t exist in 1980, and many of those are technology jobs.

The company executives signed a pledge to invest in workforce development by expanding apprenticeships and increasing on-the-job training.

The companies pledged to provide training to at least 3.8 million American students and workers for new jobs and better careers. The biggest contribution is coming from Walmart.

“We commit to train and develop over 1 million associates in the next five years,” said Julie Murphy, executive vice president of people at Walmart during the event.

Marillyn Hewson, CEO of Lockheed Martin, who has long been an advocate for rebuilding the American workforce, said her company is promising to create 8,000 apprenticeship opportunities and invest $100 million on workforce development within the next five years.

“In the years ahead, millions of American workers are in danger of being left behind by advances in digital technology, manufacturing, and automation,” Hewson wrote in an op-ed for Fox News.

“In decades past, preparing U.S. workers for the future meant focusing on promoting science, technology, engineering, and math,” she stated, adding that Americans today need to go further and think more broadly.

As part of the initiative, Trump is also creating an advisory board made up of company executives.

“We’re also establishing an outside advisory board of industry leaders and experts, which we will announce in the coming weeks. Very shortly,” said Trump.

While a strong jobs market benefits American workers, companies are having trouble finding suitable workers due to a growing skills gap. The skills shortage is a broad issue that affects many U.S. industries and forms a threat to future economic growth. Hence the U.S. education system has to respond to the needs for current and future jobs.

According to a World Economic Forum (WEF) 2016 report, 65 percent of children starting primary school today will eventually end up working in new types of jobs that don’t yet exist.

“In many industries and countries, the most in-demand occupations or specialties did not exist 10 or even five years ago, and the pace of change is set to accelerate,” stated the WEF report.