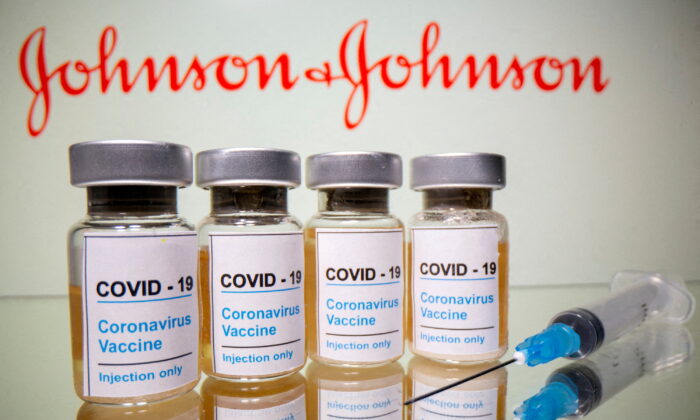 Vials with a sticker reading, "COVID-19/Coronavirus vaccine/Injection only" and a medical syringe are seen in front of a displayed Johnson & Johnson logo in this illustration taken on Oct. 31, 2020. (Dado Ruvic/Reuters)
Vaccines & Safety

Americans who received Johnson & Johnson’s single-shot COVID-19 vaccine are less protected against serious illness and hospitalizations than those who received an mRNA vaccine, and should likely consider getting a booster dose of either Pfizer’s or Moderna’s vaccine, according to new Centers for Disease Control and Prevention (CDC) data released Tuesday.

The data comes from a CDC report that analyzed 80,287 emergency department and urgent care visits across 10 states during a four-month period between Dec. 16, 2021, to March 7, 2022, when the highly transmissible omicron variant was dominant.

Based on the data, the CDC recommends that patients mix and match vaccine types in order to be better protected against COVID-19.

Researchers noted that recommendation is being made “in light of the risks for rare but serious adverse events following receipt of a Janssen vaccine, including thrombosis with thrombocytopenia syndrome and Guillain-Barré syndrome.”

Guillain-Barré syndrome is a rare but severe autoimmune disorder that can cause paralysis and occurs when an individual’s immune system damages the nerves, in turn causing muscle weakness.

However, researchers acknowledged limitations in their findings, most notably that the research took place over a limited period of time and involved monitoring patients for 120 days at most.

“Thus, the observed effectiveness of these strategies is limited to a relatively short period after vaccination,” researchers wrote.

Additionally, the small number of participants in the study who had received Johnson & Johnson’s vaccine “reduced the precision of VE estimates across both primary series and booster strategy groups” and also made it difficult to break down vaccine effectiveness according to demographic factors such as age and race, “or assessment for potential effect modification due to underlying conditions, including immunocompromise.”

On the same day that the study was released, the CDC updated its recommendations for adults to get a second booster shot of either Pfizer-BioNTech or Moderna shots, in individuals who received Johnson & Johnson’s vaccine and booster at least four months ago.

The Food and Drug Administration also granted emergency authorization for a second booster dose of an mRNA vaccine for all Americans 50 years old and older as well as severely immunocompromised people over the age of 12.