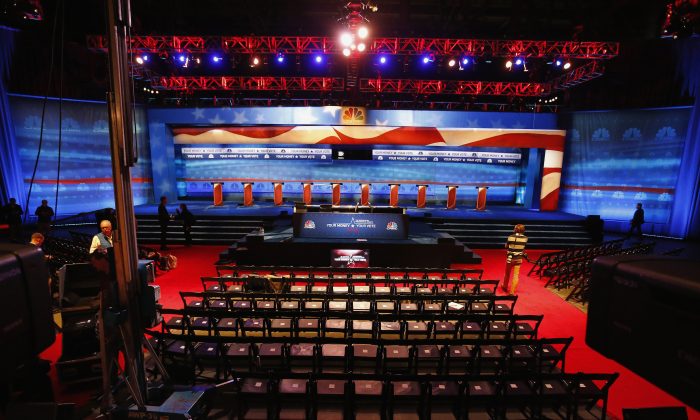 Crews prepare the venue for the Oct. 28 CNBC Republican presidential debate, inside the Coors Events Center at the University of Colorado in Boulder, Colo., on Oct. 27, 2015. Republican presidential candidates taking the debate stage Wednesday in Colorado are hoping to carry momentum from a 2014 U.S. Senate victory in this toss-up state where independent voters outnumber the electorate from both major parties. (AP Photo/Brennan Linsley)
US

WASHINGTON—Americans are more likely than they were a year ago to have positive views of the nation’s economy, but they’re still feeling more pessimism than optimism, according to a new Associated Press-GfK poll conducted ahead of CNBC’s GOP primary debate on Wednesday.

The candidates will attempt to impress Republicans in particular, who the poll finds feel much gloomier about the economy than Democrats.

Here are some things to know about opinions on the economy from the latest AP-GfK poll:

A majority of Americans—54 percent—say the nation’s economy is poor, the new poll shows. Just 45 percent call it good. Still, views of the economy are slightly rosier than they were over the summer, when a July AP-GfK poll found 41 percent of Americans described the economy as good, and more positive than they were a year ago, when just 38 percent said so.

Half of men, but just 4 in 10 women, describe the economy as good.

More than 8 in 10 Americans in the new poll described the economy as an extremely or very important issue, down slightly since July. Still, the economy rates higher in importance than any other issue in the poll.

The candidates will aim their messages at a Republican Party that has a particularly negative view of the economy.

Independents, too, are unhappy with the economy, with 33 percent seeing it as good and 62 percent poor.

Few Americans—just 17 percent—think the economy has improved over the past month, while 21 percent think it has gotten worse and the bulk—60 percent—think it’s stayed about the same.

Most Americans don’t expect to see improvement in either the nation’s economy or their own financial situations in the next year, either.

Whichever GOP candidate emerges victorious in next year’s presidential primaries will need to convince Americans that the party can do a better job than Democrats at handling economic issues.

Americans are slightly more likely to say they trust Democrats than Republicans more on handling the economy, 29 percent to 24 percent, the poll shows.

Republicans are more likely than Democrats to say they trust neither party, 29 percent to 17 percent. A majority of independents—55 percent—don’t trust either party.

Americans are slightly more likely to disapprove than approve of President Barack Obama’s handling of the economy, 52 percent to 46 percent, according to the new poll. But that’s an apparent rise in his approval rating on the issue since July, when just 42 percent said they approved.

Americans’ rating of Obama on the economy is nearly identical to how they feel about how he’s handling his job overall, with 46 percent approving and 52 percent disapproving.

The AP-GfK Poll of 1,027 adults was conducted online from Oct. 15 to 19. The sample was drawn from GfK’s probability-based KnowledgePanel, which is designed to be representative of the U.S. population. The margin of sampling error for all respondents is plus or minus 3.3 percentage points.

Respondents were selected randomly using telephone or mail survey methods and interviewed online. People selected for KnowledgePanel without Internet access were provided it for free.