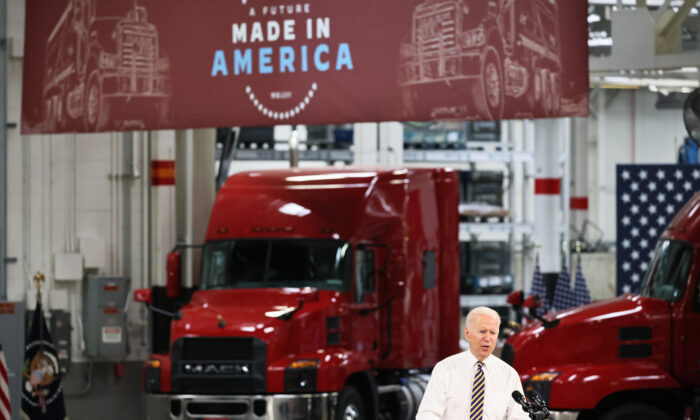 American workers’ real average hourly and weekly seasonally adjusted earnings fell 1 percent from May to June, according to the U.S. Bureau of Labor Statistics on July 13.

Though many workers are receiving larger paychecks in the middle of a tight labor market, rising prices are adding pressure to their finances due to inflation outpacing employee wage gains.

Inflation has accelerated to an extremely high 9.1 percent for the 12 months ending in June—the highest level since the early 1980s, according to the latest numbers from the Consumer Price Index on July 13.

High gas prices, which are up 59.9 percent, according to the index, have encouraged many employees to work from home and is also taking a chunk out of regular salaries.

The higher prices have particularly affected those in lower and moderate income households, as wages only saw an increase of 0.3 percent in average hourly earnings last month compared with the 1.3 percent increase in inflation.

Real average hourly earnings decreased 3.6 percent from a year ago, while earnings went up 0.9 percent and inflation pushed prices up 4.4 percent compared to the same month in 2021.

“That’s just the byproduct of the fact that inflation is the highest in 40 years,” said Bankrate’s Chief Financial Analyst Greg McBride, regarding the decline in real hourly earnings.

“If you measure it in nominal dollars, wage growth is the best it’s been in years, but you would never know it because inflation is at a four-decade high, and otherwise robust gains in wages are being more than consumed by rising household costs.”

McBride said that wage moderation or increases will be “entirely contingent” upon when inflation starts to cool down.

The Fed raised interest rates by 75 basis points in June—its most aggressive hike in the federal funds rate in nearly 30 years and is expected to raise rates again later this month.

“For all the talk of inflation peaking, there’s no sign that that has happened,” McBride said.

The Biden administration, which touted earlier that inflation was reaching its peak, is now facing serious questions, after the negative June CPI numbers showed that energy prices were the biggest driver of inflation last month.

“We keep getting head faked. And the numbers, although they’re backward-looking, keep getting worse. This is not something that’s just limited to food and gas, it’s across all categories,” he warned.

Today’s higher than expected CPI report will likely push the Fed to continue its aggressive stance to tame inflation.