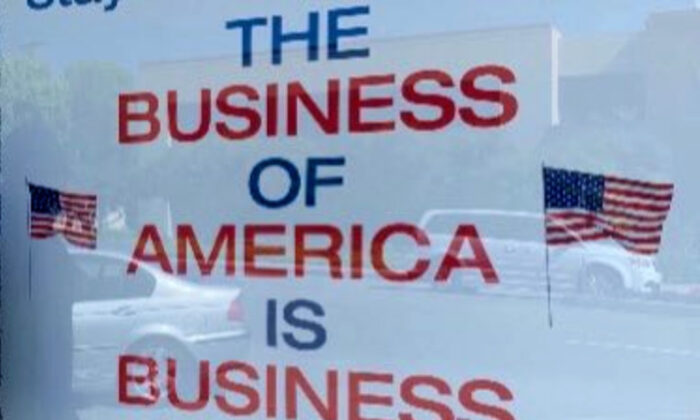 A sign supporting American business hangs in the window of a shop that has been closed due to the COVID-19 pandemic, in Los Angeles, Calif. (Courtesy of shopkeeper)
Inflation

Americans’ Pessimism About Business Sector Hits Levels Not Seen Since 2008

American pessimism about the U.S. business sector has hit its worst level since 2008, amid historically high inflation, according to a Gallup poll released on Sept. 9.

The new poll found that only 36 percent of Americans have a positive view of the business sector, down from 45 percent before the onset of the pandemic.

Gallup had been asking Americans since 2001 to rate 25 different businesses and industries on a five-point scale, ranging from “very positive” to “very negative.”

“Since then, the computer and Internet industries have seen the biggest declines, with much of that occurring before the pandemic,” Gallup reported.

“The grocery, real estate, automobile, education, and oil and gas industries have also fallen sharply—mostly since the emergence of the pandemic.”

Opinions of those surveyed said their views of the grocery industry over the last year dropped 14 percent, from 54 percent, the largest drop in the survey.

Food prices in July had risen 13.1 percent over the year-ago month, in the largest annual increase since 1979, according to the Department of Labor.

The drop in groceries was followed by the real estate industry, which tumbled from 43 percent to 34 percent.

The spike in housing and rental prices have risen to their highest level since the housing crisis of the late 2000s, according to the National Association of Home Builders, hurting affordability for most buyers.

The advertising and public relation sectors lost 8 percentage points, falling to 26 percent, a record low for that industry.

Sixty-two percent of respondents hold negative views of the oil and gas industry, with only 22 percent favorable.

Around 29 percent said they had a positive view of electric and gas utilities, down from 36 percent last year.

Gas prices hit an all-time record high in June before falling in recent months, while energy prices have skyrocketed amid a major demand for natural gas worldwide since the Russia–Ukraine conflict.

Opinions on the grocery, energy, real estate, and advertising industries took major blows due to the public’s negative mood over inflation.

The airline, pharmaceutical, and car industries, all saw significant single digit drops in favorability among respondents in the poll.

Only the restaurant industry. which rose to 60 percent and farming/agriculture, which fell to 57 percent received positive marks from the majority of the respondents.

“Consumers are searching for those who are trustworthy, and American farmers rise to the top of that list. The iconic farmer represents a commitment to shared values like family, community, hard work, and doing ‘what’s right,'” said Charlie Arnot, CEO of The Center for Food Integrity, to the Iowa Farm Bureau.

“Those values are in short supply in some sectors, which reinforces the value farmers bring not just to agriculture but to our communities and our nation as a whole.”

Partisanship and Blame for Inflation

The biggest drop in Gallup’s poll this year came from Democrats, whose average approval rating in the economy fell, from 46 percent to 39 percent

Republicans’ opinion on business has not changed much since Joe Biden entered the White House, when it fell dramatically, falling 1 percent, to 31 percent this year.

There were large partisan gaps between industries favored by Democrats and Republicans.

Democrats have a a more positive view of the federal government, the movie industry, the education and publishing industries, and the television and radio industry, compared with Republicans.

Meanwhile, the federal government has a 58 percent negative approval rating among all those surveyed.

According to The Hill, Democrats tend to accuse food and energy companies of price gouging in order to take advantage of high inflation.

The Democrats have blamed much of the inflation on corporate greed during the midterms, accusing major corporations of currently exploiting price rises.

Most Republicans and economists believe that issues revolving around supply and demand along, with the Biden administration’s economic policies, are responsible for the high prices.

Gallup conducted the survey from August 1 to 23, interviewing 1,006 American adults, with a 4 percentage-point margin of error.